The FCC Just Voted to Regulate the Internet Like a Utility 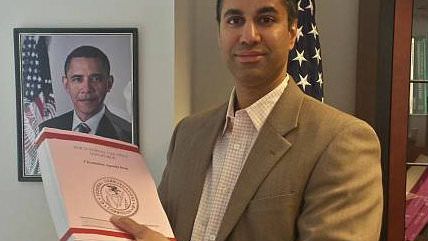 In a 3-2 vote today, the Federal Communications Commission (FCC) voted to radically overhaul the way Internet service is regulated. FCC Chairman Tom Wheeler and the commission's two Democratic commissioners voted to move forward with the rules. The agency's two GOP-appointed commissioners opposed them.

Under the new rules, broadband providers, long classified by the agency as Title I information services, will now be regulated as Title II telecommunications services—essentially making them public utilities, like the phone system. The move is designed to allow the FCC to implement strict net neutrality rules limiting how much control Internet service providers (ISPs) can exert over what passes over their networks.

Today's vote is the result of a lengthy process begun by Chairman Wheeler roughly a year ago, and that process came in the wake of two previous efforts in which the agency's net neutrality rules were struck down in court. But the end result of the vote was largely set near the end of last year, when President Obama released a statement calling for the agency to implement the strongest possible net neutrality rules.

Obama's statement, itself somewhat atypical in its attempt to publicly influence an independent regulatory agency, followed a long, secret effort inside the White House, in which administration staffers acted, as The Wall Street Journal reported, "like a parallel version of the FCC." Wheeler had been considering less restrictive rules, but changed his course after the president's statement.

Today's vote will mean that Wheeler's proposal, which has been kept secret up until now, will finally be released to the public. And it likely means that the FCC will push forward with clarifying and implementing the as-of-yet-unknown-details of Wheeler's proposal.

In part that's because much remains uncertain about exactly how the proposal will be implemented. Wheeler's plan promises to use the FCC's forebearance authority to hold off on some of the more onerous parts of Title II regulation, like rate regulation, but this amounts to little more than an unenforceable promise not to regulate ISPs quite as strictly as Title II allows. There will also be fights over which taxes and fees may apply to Internet service under the new regulatory regime. Proponents of the Title II switch say that Internet service won't be subject to new fees under the proposal, but in today's meeting, FCC Commissioner Ajit Pai, a Republican appointee who opposes the Wheeler plan, warned that new taxes and fees on Internet service were sure to come.

It is also virtually certain to result in another court battle—one that the FCC may well lose, as Berin Szoka of Tech Freedom, which opposes Wheeler's plan, has argued. At minimum, the proposal will be challenged and, over time, probably redefined.

In the meantime, though, it means that the FCC has taken an unprecedented and far-reaching step in order to make good on one of the Obama administration's long-running political priorities—a step that solves no significant existing problem, but is instead designed largely to fend off hypothetical harms, and give the agency far more power over the Internet in the process.

As Commissioner Pai told ReasonTV, the move is a "solution that won't work to a problem that doesn't exist." It is a solution, however, that is now in place, and is sure to create some problems of its own.