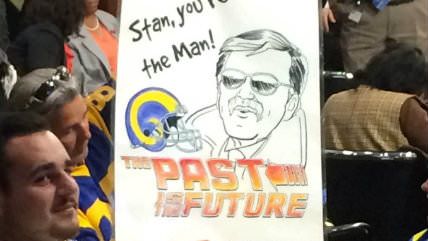 It's time for this month's "government shadily passes a crony deal to benefit a multibillion-dollar sports franchise" story.

In a city council meeting Tuesday on the construction of a football stadium for the National Football League's (NFL's) St. Louis Rams, Inglewood, Calif., mayor James T. Butts Jr. announced, "We need to do the will of the people and we need to do it tonight."

Ironically, the will of the people on this matter will never actually be known. That's because, amid a crowd of cheering Rams fans, the Inglewood council voted unanimously Tuesday to fast-track—i.e., prevent public voting on—approval of the plan.

Teams have been threatening to relocate to Los Angeles, the nation's second largest media market, for decades, but things really seem to be getting serious now. Inglewood is attempting lure back the Rams, a team that played in Southern California from 1946 to 1994, by approving construction of a stadium without any guarantee the team will actually decide to move there. It's effectively a $1.86 billion sacrificial offering to the NFL overlords.

In fairness, the planned 80,000-seat stadium will be 100 percent privately funded, which seems to be rarity in stadium deals these days. There are of course a couple of major catches, though.

For one thing, Inglewood will reimburse the developers for expenditures on things like streets and sidewalks, assuming tax revenue from the completed project exceeds $25 million. That's a threshold the stadium is expected to easily clear, with the developer reaping an estimated $50 million to $60 million in reimbursements.

Second, the fast-tracking allows developers to bypass an environmental review process, which can often take years. While libertarians would normally praise the removal of such red tape, it's cronyism when that privilege is granted to only one politically connected private firm—and stadium developer Hollywood Park Land Co. is nothing if not well-connected.

The development company, of which Rams owner Stan Kroenke is a member, has donated $118,500 to Mayor Butts and two Inglewood councilmen since 2006, according to the Los Angeles Times. The group provided a fifth of the money Butts raised for a possible 2015 runoff election campaign.

A far better policy would be to grant tax breaks and/or remove regulatory red tape for all private businesses.

The vote was not supposed to occur so soon, but with the San Diego Chargers and Oakland Raiders threatening a joint move to the City of Angels—complete with their own privately funded stadium—local politicians are in a race to see who can land a team the fastest. For Inglewood, that means granting some special privileges. The city's proposal now joins three other potential NFL stadium development projects in L.A.

As many as five teams have been linked to potential moves there, which just proves the city need not provide any additional incentive to lure a team their way.

Kroenke has already received over $1.3 billion from the city of St. Louis, and Missouri is now bribing him with $500 million in public funds in the hopes his team will stay. It must be rough living a billionaire's life, deciding between hundreds of millions of taxpayer dollars in one city vs. tens of millions in tax breaks and an even bigger media market in another.

Considering many cities are now forking over checks in the ballpark of hundreds of millions for sports stadiums, though, perhaps we should be glad the cronyism in this Inglewood plan is so mild.