U.S. businesses are reclassifying themselves to avoid the highest corporate tax rate in the West. 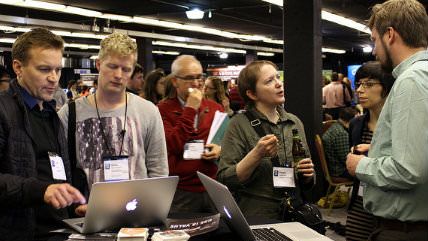 The number of registered corporations in America has decreased every year since 1994, according a report from the Tax Foundation, and the trend shows no signs of stopping.

In this chart from the report, "C Corporations" are ones we think of in the traditional sense—those that are taxed separately from their owners' and shareholders' incomes:

The report, issued in January, has data up to 2011, the most recent year of Internal Revenue Service (IRS) reporting. In that year, the IRS reported 1.6 million C Corporations, the lowest since 1974 and 1 million fewer than the high point of 1986.

As the report states:

The report claims that the reduction in the number of incorporated firms is not so much due to inversions, mergers, or bankruptcy, but rather more firms classifying themselves as S Corporations, in which profits pass directly to owners and are taxed as individual income. Individual rates are typically lower than the U.S. corporate tax rate, currently the highest among members of the Organisation for Economic Co-operation and Development at 35 percent federal plus an additional 4.1 percent average rate levied by individual states.

Reclassifying a company as an S Corp also avoids the "double taxation" of shareholders, who would be subject to capital gains taxes on corporate profits for which corporate taxes were already levied. Only a handful of developed nations—the U.S. among them—have this double taxation.

These policies have had significant effect on tax revenue, according to the report:

This explains why U.S. corporate tax revenues are smaller than you might expect, given that we have the highest corporate tax rate in the West (shades of the Laffer Curve at work). As of 2011, over 60 percent of U.S. business profits are taxed as individual income.

Here's where you're probably wondering: If all of these corporations are merely reclassifying themselves—not actually disappearing—what's the big deal? The answer, according to the Tax Foundation: "Pass-through businesses do not offer the same ability to invite investment from thousands of shareholders or easily transfer shares. That means the decline of the traditional corporate sector represents an economic distortion that is hobbling American industrial capacity and job growth."

The report recommends the U.S. lower its corporate income tax rate and eliminate double taxation to solve this issue. The former policy has been discussed widely for years, but no meaningful legislative progress has been made.