Judge 'Outraged' at Innocent Man, Orders Him to Pay $30,000 in Support for Child That Isn't His

When poor men are inaccurately declared fathers of children they don't know, the justice system sneers at their pain. 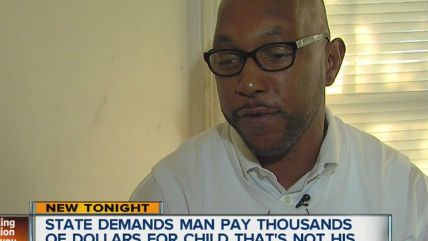 Carnell Alexander is not the father of the now-adult child for whom several courts, including the Wayne County Circuit Court this week, have ordered him to pay $30,000 in back child support for. How do we know he's not the father? Because he took a DNA test proving the contrary, and even the mother (an ex-girlfriend) now says he's not.

How is it possible in the Land of the Free that men can face huge fines, revocation of professional licenses, forfeiture of the right to international travel, and sometimes (as in Alexander's case until this week) even jail time, from owing child support to kids that aren't theirs? I wrote a feature about that 11 years ago, entitled "Injustice by Default." Short version:

Governments (and sometimes even hospitals) are financially incentivized to attach paternity to the children of single mothers, particularly those seeking welfare benefits. Departments of Child Support Services will sometimes go on information as flimsy as "Dude with this name living in Southern California"; if a records search turns up only one dude, he will likely be mailed a court summons. That court summons will often be very confusingly written, so that the men don't realize that they are just 30 days away from being declared the father via default judgment. Once you have been named the father, you owe all back child support (sometimes with interest), said support will be garnished from your wages, and it is devilishly hard to get your paternity undeclared, even with DNA proof and sworn affidavits from the mother.

So why don't we hear about this outrage more? Because nobody likes to defend "deadbeat dads," and the people hardest hit are typically poor men who have even less political and media clout than they do access to good lawyers. Here's how Carnell Alexander describes how he failed for decades to produce a good enough legal motion to set aside the judgment:

For one, he says when he learned he was allegedly a father, he had just gotten out of prison.  He had no income and no savings.  He has an eighth grade education.  He could not find a lawyer to help him. He was on his own. He says while he may not have filed a certain motion required by the bureaucratic court system, he did make sure Friend of the Court workers and judges on the case knew he was not this child's father, had never been in the child's life, and didn't want to be held responsible.

"Every court appearance that she said I made, I made it clear to them I was not the father of this child," said Alexander.

Carnell says when he first learned of the case against him,  the court gave him an old address for the mother who claimed he had fathered a child.  He went there hoping to get a DNA test to prove his story.  She didn't live there.  He says the court told him it could not help him in any other way to locate the mother who said he was the father. He spent a lot of time looking for her over the years, but failed until 2013.  Once he had proof, he again tried to prove his case.

"I am outraged that Mr. Alexander for two and a half decades failed to take this matter seriously," said Judge Kathleen McCarthy. […]

"That motion must be filed within 3 years after the child's birth, or within one year after the order of filiation is entered.  The defendant has failed to timely file this motion setting aside the acknowledgement of parentage[.]"

Not only that, Judge McCarthy is cheesed off that journalists have dared criticize her actions in this case:

"I am outraged at the media for the willful misrepresentations of the facts of this case," said Judge McCarthy.  "Casting this court in a negative light."

Call my outrage selective, but I save more of the stuff for those who preside over willful miscarriages of justice, at total odds with their job description.

As we write about at Reason constantly, the criminal justice system in practice can look an awful lot like an apparatus for shaking every last dime out of the pockets of the poor. Poor communities get policed more, then have a much harder time meeting the Chinese water torture of court dates and filing deadlines, too often ending up in a revolving jail door for underlying offenses that just don't merit such punishment. That's why, as Jesse Walker has noted, any serious anti-poverty program must include criminal justice reform.