Creepy Joe Biden: A Living Argument for Keeping Politicians on a Leash

The authority that government wields is inescapable. And when government provides a welcoming home for the likes of Joe Biden, so is he. 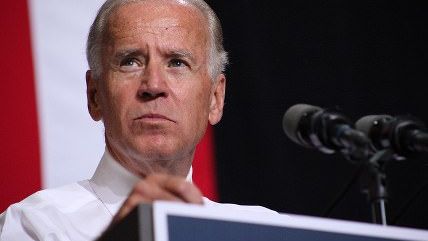 Years ago, I took a job with a company directed by a man who, it turned out, was a little erratic. He would call staffers at home late at night to discuss work, after disappearing for days he'd reappear and demand accounts of what everybody was doing while he was missing, and he would blurt out inappropriate and offensive comments without provocation. Morale took a bit of a hit from the shenanigans and I was brought in, not that I was originally told this, to act as a buffer between the seemingly unhinged boss and the chaos he'd created.

Pretty much everybody, myself included, quit one by one. The company tanked soon after. But as bizarre as employment at that outfit was for all involved, the damage was self-contained, since we were all free to leave and other businesses were able to avoid the blast zone of the operation's destruction. Nobody had to stick around to suffer the boss's increasingly weird antics. So we didn't.

Which brings us to the issue of the vice president of the United States, Joe Biden, who is once again drawing attention with his "odd" behavior. Every bit as bizarre as my old boss, though perhaps less likely to ultimately be gunned down in a drug deal gone bad (yes, that's how that story ended), Biden is also inescapable, locked in to a fixed term in office. We can't just get fed up and quit—which is a damned shame, since the SOB is a heartbeat away from the power to issue executive orders and the role of commander-in-chief of the largest military machine in the world.

Maybe that sense that we have no choice is why we do little more than chuckle over his verbal gaffes, appropriation of other people's words and life experiences, advice to defend against assailants by unloading ammunition into the air in violation of the law, and public pawing of any women who come within reach (something he cautions others against).

For years the official story on Joe Biden, always dogged by his inconvenient habit of doing stupid shit, has been that he's a hardworking and savvy political operative. After all, he climbed to the top of the political ladder.

But he did most of the climbing in Delaware, a flyspeck of a state overshadowed by its larger neighbors along the East Coast. The political ladder there is more of a stepstool, and rather than climb to the top, he may have simply tripped and landed there. On his first foray into the national limelight, he was famously caught stealing a speech from British politician Neal Kinnock without so much as adapting it to fit his own family history rather than that of the Labour Party orator.

Then it emerged that this was a bit of a habit.

Twenty years later, still perched inches in the air atop Delaware's highest rung of political achievement, Biden reentered the national political scene. With comments and behavior you might expect from an uncle who doesn't get invited to family gatherings, he proceeded to demonstrate that he's either incapable of learning from hard experience, or that he considers self-control an overrated virtue.

But for Biden, every day seems to be Tuesday, year after year. And yet, perhaps as life insurance, Barack Obama brought him along for the ride, adding him to his party's national ticket in 2008, and keeping him onboard for reelection in 2012. Sure, the vice presidency doesn't have a lot of power, but it's a flu virus or a chicken bone away from the real deal.

There are a lot of good reasons to limit the power of government. The state is often abusive, it's intrusive, and it's incompetent. The coercive powers of regulatory agencies can be used maliciously. Government offices are often wasteful and inefficient.

Ultimately, unlike my old job, government is inescapable. And when government provides a welcoming home where the levers of power can be exercised by the likes of Joe Biden, so is he.