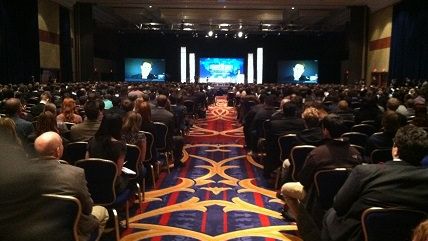 There are no heroes, only heroic actions. That's what NSA whistleblower Edward Snowden told a cheering crowd of more than 1,000 libertarian students at the International Students for Liberty Conference in Washington, D.C. this weekend. Thanks to the magic of modern technology, Snowden was able to accept his award via video feed, and answered questions from ISFL President Alexander McCobin.

Snowden's statement carried deep irony, given that the room universally and undeniably disagreed with him—he was their hero. While many students were also delighted to hear from Rand and Ron Paul, Justin Amash, John Stossel, Andrew Napolitano, and a host of other libertarian celebrities over the course of the weekend, Snowden was the main draw. He received standing ovation after standing ovation for his encouraging words about the importance of reining in government surveillance run amok.

That fact will not be surprising to anyone who has spent serious time at college campuses, talking to students, surveying their general sentiments about culture and politics. A libertarian lightning bolt has struck the under-30 crowd. The result has not been instant-conversion but a slow, general embrace of the idea that the government cannot be trusted to run our lives.

As I* watched Snowden speak—ISFL displayed him on two gigantic telescreens, to awe-inspiring effect—I couldn't help but recall The Washington Free Beacon's recent half-hearted hit-piece on Marianne Copenhaver, a Rand Paul staffer who believes Snowden deserved the Nobel Peace Prize. The Free Beacon, a conservative outlet, found this opinion so blatantly extreme that it wasn't even necessary for writer Alana Goodman to explain why. Anyone who embraces Snowden is instantly dismissible, Goodman implied, and could never work for a plausible Republican Party presidential candidate.

Young people play an important role in campaigns. They do the canvassing and the tabling. They put in long hours for little pay doing the actual, physical labor involved in organizing a candidacy. Indeed, Sen. Barack Obama's youth appeal was something of a trump card in his election—not merely because young people voted for him in droves (though they did), but also because they mounted a herculean organizing effort on his behalf, knocking on doors, registering people to vote, showing up to rallies, etc. etc. Since the work is hard and all-consuming—and the pay quite bad—these kids have to actually really like the guy they are trying to elect in order for the effort to be worth it.

Perhaps neoconservatives are right, and a candidate whose staff includes Snowden-loving millennials is too far out there to ever win the Republican nomination, let alone the presidency. But if that's true, I'm left wondering who a traditional Snowden-denouncing candidate could possibly count on to work for him. Are there great numbers of students somewhere eager to see Snowden hanged? Who support the NSA and the abridgment of privacy and liberty? Who are eager for more wars?

I doubt that such students, if they exist at all, are numerous and politically interested enough to put together a conference on the coldest weekend of winter that produces anywhere near the level of attendance, excitement, and general excellence that ISFLC did. Such a conference would probably be overtaken by libertarian students organizing against the Snowden bashers, anyway.

He is their hero, after all.

*Disclaimer: I spoke at the conference, as did several other Reason staffers. I have also participated in many previous ISFL events. Reason is a "Silver Level" sponsor of the conference.