The FCC wants to regulate the Internet as a utility, but won't release its full plan. 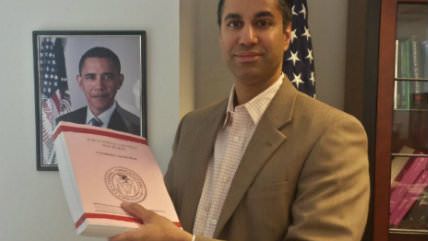 On Wednesday, Federal Communications Commission (FCC) Chairman Tom Wheeler announced a major new proposal to regulate the Internet as utility, and, in doing so, institute restrictive net neutrality rules on every major component of the Internet. Given the Obama administration's unusual and aggressive effort to push the FCC chief into putting forth the proposal, it's better thought of as the White House's net neutrality proposal.

The proposal is extraordinary in many ways: According to an op-ed by Wheeler and other accounts, it would not only reclassify wired broadband service as a Title II utility, like the phone system, it would also apply to wireless data. In addition, it would give the FCC new authority over the Internet's backend—the middleman services that transfer data between Internet service providers (ISPs). It would pave the way for new taxes to be applied to Internet service.

It would, in other words, be a fundamental break from the sort of relatively light federal regulation that has defined the Internet since its inception, and it represents a blatantly political reversal on the part of Chairman Wheeler, a technically independent agency head who plainly caved to White House pressure.

But perhaps the most extraordinary thing about the proposal, which is 332 pages long, is that it is being kept secret from the public—and it will remain secret until after a vote later this month in which it is likely to pass on a 3-2 basis, with Wheeler and the FCC's two Democratically appointed commissioners outvoting the two Republican-appointed commissioners.

The following picture, tweeted by one of those Republican commissioners, Ajit Pai, earlier today, is about as close as most Americans will get to the proposal before the vote:

The commissioners can see the plan before they cast their votes. But the rest of us can't. Lobbyists will likely be able to discover key details affecting their clients, and some details will leak out in the press. But the full text of the plan won't be made public at all before the vote.

The proposal is arguably the biggest development in how the government regulates the Internet in almost two decades. As Pai writes in a statement based on an initial look at the plan, "It gives the FCC the power to micromanage virtually every aspect of how the Internet works. It's an overreach that will let a Washington bureaucracy, and not the American people, decide the future of the online world."

And yet the public won't get to see it until after it passes.

This isn't the first time the FCC has kept a major net neutrality plan secret. In 2010, under Chairman Genachowski, an earlier White House-backed net neutrality proposal, later voided in court, was kept secret until passage.

It doesn't exactly inspire a lot of faith in these proposals that they are kept under lock and key until passage. And it speaks to the dubious motives of both the administration and Wheeler that they would rather pass these proposals in secret than make them public and expose them to direct criticism and open debate. The path to what Wheeler calls an "open Internet" isn't itself very open.