Broadly written law could hide sources of lethal injection drugs and even the identity of an executed prisoner. 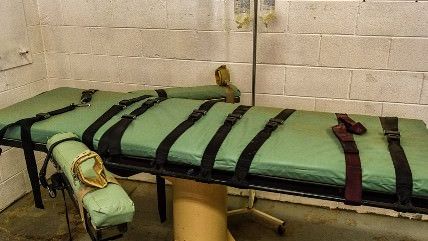 Last week, the Idaho Senate Judiciary and Rules committee decided to move ahead with legislation propsed by the state's Department of Correction, broadening its already existing death penalty confidentiality policy (designed to protect the identities of the executioner, the on-site physician, and anyone else directly involved with the execution) into state law.

But a slyly-worded kicker buried in the middle of the text might be the most significant aspect of the bill. Newly added to the list of confidential information is "the source of any lethal substances."

The lack of transparency regarding executions and the provenance of the drugs used in lethal injection "cocktails" has been a growing concern over the past year, following a string of gruesomely botched executions.

Many states are secretive about the sources of their lethal injection drugs, in part because a boycott by European companies has led to a shortage, and accounts of prisoners writhing in excruciating pain during prolonged executions have led to questions about the quality of these substances. The Guardian, Associated Press, and several other news organizations have filed suit against the state of Missouri over this secrecy, which The Guardian says is "believed to be the first time that the first amendment right of access has been used to challenge secrecy in the application of the death penalty."

Parrish Miller of the Idaho Freedom Foundation points out another problem with the wording of the bill, "It could conceivably include the time and place where the execution is carried out, and even the identity of the person being executed."

Currently, the Idaho Administrative Procedure Act — commonly called IDAPA by state lawmakers and agency officials — states that some execution records are exempt from disclosure under Idaho's Public Record law. But the public records law itself doesn't specifically state what those exemptions are, although it does give the Board of Correction authority to set rules under IDAPA.

"Notwithstanding any provision of law to the contrary, any such confidential information shall be privileged and shall not be subject to discovery, subpoena or other means of legal compulsion," the bill reads.

Earlier this week, two Idaho lawmakers proposed legislation that would abolish the death penalty. Tonight, the state of Texas is scheduled to execute a convicted murderer, who reportedly has an IQ of 67.