Comparing the rhetoric of two presidents who inherited economic messes reminds us of the wide gap between their respective recoveries. 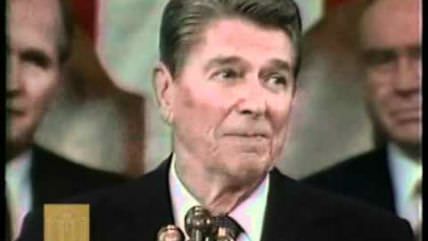 Two years ago I compiled a list of commonalities found in the State of the Union addresses from the last seven presidents* in the first year of their second term. As I concluded then:

Mining through the State of the Union archive can teach valuable lessons for those willing to learn. It's not just that presidential speeches all tend to sound the same, with their calls for "energy independence" and hosannahs to America's leadership of the free world. But the repeated failure of grand legislative schemes, the persistent references to underperforming areas of American life (usually in provinces, like education, that are dominated by the government), and the relentless rhetorical urgency to act now for the sake of action, all remind us that politics is a messy and generally ineffective way of addressing problems, and that politicians are not a small bit ridiculous.

But upon closer inspection, the presidency that was by far the most analogous to Barack Obama's in terms of the miserable economic conditions inherited was that of Ronald Reagan. And comparing the Gipper's 1986 address to Obama's 2014 was a startling exercise in contrast, illustrating the wide gulf between their competing economic recoveries. As I noted last year,

Here's how Reagan described it in his 1986 State of the Union address: "I am pleased to report the state of our Union is stronger than a year ago and growing stronger each day. Tonight we look out on a rising America, firm of heart, united in spirit, powerful in pride and patriotism. America is on the move! The United States is the economic miracle, the model to which the world once again turns." […]

Obama, in his State of the Union address, spoke not about any economic "miracle" already in progress but about turning the corner any day now. "I believe this can be a breakthrough year for America," the president said, lamely. "After five years of grit and determined effort, the United States is better positioned for the 21st century than any other nation on Earth."

So as Obama embarks on what will certainly be more of a chest-thumping exercise than in previous years, here's a reminder of how Reagan was characterizing the economy in 1987:

Six years ago I was here to ask the Congress to join me in America's new beginning. Well, the results are something of which we can all be proud. Our inflation rate is now the lowest in a quarter of a century. The prime interest rate has fallen from the 21 1/2 percent the month before we took office to 7 1/2 percent today. And those rates have triggered the most housing starts in 8 years. The unemployment rate—still too high—is the lowest in nearly 7 years, and our people have created nearly 13 million new jobs. Over 61 percent** of everyone over the age of 16, male and female, is employed—the highest percentage on record. Let's roll up our sleeves and go to work and put America's economic engine at full throttle. […]

We've had great success in restoring our economic integrity, and we've rescued our nation from the worst economic mess since the Depression. But there's more to do.

Note that the measurement of the labor-force participation rate has changed over time; the Bureau of Labor Statistics now puts the rate as of January 1987 at 65.4 percent, whereas in December 2014 it's at 62.7 percent, a 36-year low. See Nick Gillespie on what this number indicates.

And since I was trash-talking presidential speechcraft yesterday, I'd like to highlight this nice little bit from Reagan's speech:

Over the years—I won't count if you don't—nothing has been so heartwarming to me as speaking to America's young, and the little ones especially, so fresh-faced and so eager to know. Well, from time to time I've been with them—they will ask about our Constitution. And I hope you Members of Congress will not deem this a breach of protocol if you'll permit me to share these thoughts again with the young people who might be listening or watching this evening. I've read the constitutions of a number of countries, including the Soviet Union's. Now, some people are surprised to hear that they have a constitution, and it even supposedly grants a number of freedoms to its people. Many countries have written into their constitution provisions for freedom of speech and freedom of assembly. Well, if this is true, why is the Constitution of the United States so exceptional?

Well, the difference is so small that it almost escapes you, but it's so great it tells you the whole story in just three words: We the people. In those other constitutions, the Government tells the people of those countries what they're allowed to do. In our Constitution, we the people tell the Government what it can do, and it can do only those things listed in that document and no others. Virtually every other revolution in history has just exchanged one set of rulers for another set of rulers. Our revolution is the first to say the people are the masters and government is their servant. And you young people out there, don't ever forget that. Someday you could be in this room, but wherever you are, America is depending on you to reach your highest and be your best—because here in America, we the people are in charge.

* I included LBJ in the list—so sue me!