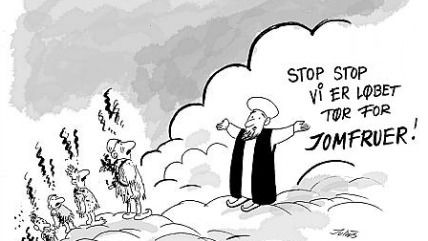 Nine years before two gunmen executed 10 people at the offices of Charlie Hebdo for the crime of insulting Islam, two Muslim organizations tried to imprison the editor of the satirical French weekly for the crime of insulting Islam. Although Charlie Hebdo won that case, the fact that it was possible illustrates how French law legitimizes the grievances underlying yesterday's barbaric attack by endorsing the illiberal idea that people have a right not to be offended.

The Paris Grand Mosque and the Union of French Islamic Organizations sued Charlie Hebdo  and its editor at the time, Philippe Val, over its 2006 publication of three cartoons depicting the prophet Muhammad, including two that had appeared in the Danish newspaper Jyllands-Posten the previous year. One of the Jyllands-Posten cartoons showed Muhammad in heaven, telling a line of arriving suicide bombers, "Stop, stop, we ran out of virgins!" The other depicted Muhammad with a turban in the shape of a bomb. The third cartoon was a cover illustration labeled "Muhammad Overwhelmed by Fundamentalists" that showed an anguished prophet with his hands to his face, saying, "It's hard being loved by assholes."

The complaining organizations argued that all three cartoons violated French law, which makes insulting people based on their religion a crime punishable by a fine of €22,500 and six months in jail. In March 2007 a Paris judge, Jean-Claude Magendie, concluded that two of the cartoons targeted radical Islamists, as opposed to Muslims in general. He said the third cartoon, the one with Muhammad wearing a turban-bomb, did qualify as an attack on Muslims in general. But because Val had published it in response to an earlier controversy over its appearance in Jyllands-Posten, Magendie ruled, he lacked the requisite intent to insult. An appeals court upheld the decision, although it concluded that none of the cartoons amounted to an attack based on religion.

Since Charlie Hebdo won and Val escaped prison, you may wonder, what's the big deal? French courts, which since the mid-1980s have rejected a series of religious-insult complaints against written and oral commentary, novels, movies, and movie posters, seem to be doing a pretty good job of distinguishing between legitimate art or journalism and gratuitous offensiveness. But in a free society, that is not the government's job. Aside from the chilling effect that the potential for such inquiries is apt to have, this system teaches people that the use of force is an appropriate response to words that offend—a principle that is poisonous to free expression and conducive to violence.

"In France," Charlie Hebdo contributor Laurent Leger remarked a few years ago, "we always have the right to write and draw. And if some people are not happy with this, they can sue us, and we can defend ourselves. That's democracy. You don't throw bombs, you discuss, you debate. But you don't act violently. We have to stand and resist pressure from extremism."

I heartily endorse Leger's sentiment. Yet it clearly is not true that in France people "always have the right to write and draw." That right is qualified by the law under which Charlie Hebdo was sued, which in addition to religion covers insults based on race, ethnicity, national origin, sex, sexual orientation, or disability. Defamation (as opposed to mere insult) based on any of those factors is punishable by up to a year in prison, and so is incitement to discrimination, hatred, or violence. A separate statute makes questioning the Holocaust a crime subject to a five-year prison sentence.

Although Leger presents this web of speech restrictions as an alternative to violence, it is also an excuse for violence. After all, the French government has announced that offending the wrong people by saying the wrong thing in the wrong context can be treated as a crime. While Charlie Hebdo was acquitted of that crime, no doubt many Muslims disagreed with that result. It would not be surprising if a few of them, convinced that their rights were violated and that they could not depend on the government to vindicate them, resorted to self-help.

I am not saying yesterday's massacre can be blamed on France's hate speech laws. Although the two suspected gunmen were born and raised in France, there is no evidence that they cared about the content of these statutes or that they needed any additional justification beyond their own understanding of Islam. But it is hypocritical and reckless for a government that claims to respect freedom of the press to criminalize images and words based on their emotional impact. Although such laws are defended in the name of diversity and tolerance, it is the opposite of enlightened to invite legal complaints aimed at suppressing offensive messages.

Instead of facilitating censorship by the sensitive, a government truly committed to open debate and freedom of speech would make it clear, in no uncertain terms, that offending Muslims (or any other religious group) is not a crime. Sacrilege may upset people, but it does not violate their rights. By abandoning that distinction, avowed defenders of Enlightenment values capitulate to the forces of darkness.