An Indiana law defining "abortion clinics" to include facilities that prescribe abortion drugs was found unconstitutional by a federal judge Wednesday. 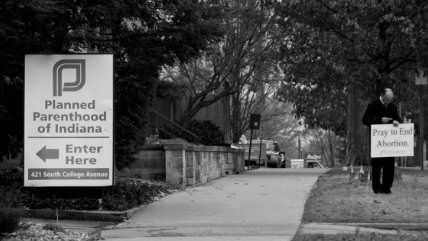 An Indiana law defining "abortion clinics" to include facilities that prescribe abortion drugs was found unconstitutional by a federal judge Wednesday.

Passed by Indiana's General Assembly in 2013, the law defined any facility that offers abortion by pill—also known as medical abortion or non-surgical abortion—as an "abortion clinic", and thus subject to building and safety standards set for places that perform surgical abortions. Private physicians that offer the abortion pill, however, were exempted from the state's new regulatory requirements.

As it stands, there's only place in Indiana that prescribes the abortion pill without performing surgical abortions and isn't a doctor's office: a Planned Parenthood clinic in Lafayette, Indiana. The clinic is tucked away in an office alcove on the outskirts of town, a fact I know because I used to live in Lafayette and—absent health insurance or a car—trekked out there on the city bus to pick up $7 packs of birth control pills and get tested for cervical cancer.

Lafayette is not a wealthy community, nor a big one. For many low-income women, this Planned Parenthood serves as the only place to get affordable contraception, gynecological exams, STD tests, and, yes, sometimes the abortion pill. Under the new law—one of more than 200 abortion restrictions passed by Indiana's GOP-controlled legislatures since 2011, according to Bloomberg Politics—the office would have had to make costly and unnecessary renovations or stop prescribing the abortion pill.

But with help from the American Civil Liberties Union (ACLU) of Indiana, Planned Parenthood filed a suit alleging that the law is unconstitutional and makes an unfounded distinction between physician's offices and other facilities that offer abortion drugs. In yesterday's decision, Judge Magnus-Stinson sided with Planned Parenthood and the ACLU, describing the 'unequal regulatory treatment' of physician's offices and other places that prescribe abortion drugs as "arbitrary" and having "no rational basis".

"It is undisputed that a 'physician's office' with the same physical layout and amenities as the Lafayette clinic would not have to modify itself to comply with the physical plant requirements at issue because it would qualify for the 'physician's office' exception," wrote Magnus-Stinson. The court granted Planned Parenthood of Indiana's motion for summary judgement on claims that the abortion clinic law violated the U.S. Constitution and the Equal Protection Clause. It denied the claim that the law violated the Fourteenth Amendment by denying patients' access to abortion.

The case is Planned Parenthood of Indiana and Kentucky v. Commissioner.