A Selfie in the Voting Booth? We've Got a Felony For That 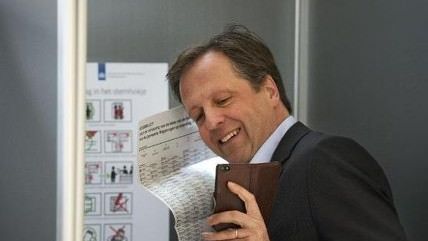 Think twice before you post that grinning voting booth selfie followed by the #turnoutforwhat hashtag, because you may be commiting a felony.

As reported by the Peoria Journal Star, "Section 29-9 of (Illinois') election code essentially says that you can't show other people who you're voting for, even in a photo after the fact." The law has been on the books since 1974, passed by the legislature as a means of stifling "vote-buying" schemes, intimidation, and other forms of tampering. Though local election officials told the Journal Star they had never heard of the law being enforced and the Peoria County State's Attorney said he would be "unlikely" to prosecute a voting booth selfie violator, the code remains a Class 4 felony on the state books.

It's not just Illinois. Dozens of states have restrictions on photographing your ballot. The Digital Media Law Project produced a thorough examination of ballot disclosure laws in 2012, which they described as a "First Amendment Anomaly":

As reflected in our new guide, many states have statutes that prohibit the display of one's own marked ballot to others. A small number of these states only prohibit disclosure of one's ballot in the voting room or prior to submission of the ballot, but most impose a flat prohibition on disclosure backed up by criminal penalties or cancellation of the vote in question. These statutes by their explicit terms appear to ban sharing of a photograph of one's ballot even after the election is over.

Now, we can debate the wisdom of a voter openly declaring the candidate for whom he or she voted. There are sound reasons for a person to keep his or her ultimate selection secret, whether to prevent intimidation at the polling place or retribution by employers or others after the fact. It is easy to imagine situations in which the thoughtless posting of a marked ballot on Facebook could result in negative consequences, as with the posting of so many other ill-advised Facebook photos.

And yet, the First Amendment's protection is at its peak in the realm of speech on political issues. Can a law prohibiting a voter from disclosing his or her own marked ballot be constitutional?

Just this week, the American Civil Liberties Union (ACLU) filed a lawsuit against the "Live Free or Die" state of New Hampshire for updating its existing ban on photographing a marked ballot to specifically prohibit "taking a digital image or photograph of his or her marked ballot and distributing or sharing the image via social media," punishable by up to a $1,000 fine.

Unlike in Illinois, the law is being enforced. According to Boston.com, at least 3 citizens of the Granite State have been investigated by the state's attorney general for posting their ballot to social media, including a police officer who voted for his dead dog as a write-in candidate for the Senate. In an act of defiant rebellion against his own state's law, State Rep. Leon H. Rideout (R-NH), a co-plaintiff in the ACLU's lawsuit, tweeted his marked-up ballot during this past September's Republican primary election "to make a statement." To date, he has not been fined.

So be careful out there today when bragging about fulfilling your civic duty, or at least check the Digital Media Project's helpful guide to see if your state has laws curtailing post-election political speech. As civil liberties lawyer and Reason contributor Harvey Silverglate wrote in his book "Three Felonies a Day," the average American may regularly and unwittingly engage in felonious activity, but he/she will generally not record and publish these petty crimes all over social media.