Does Hillary Clinton Oppose NSA Spying? Nobody Knows (Except Maybe the NSA) 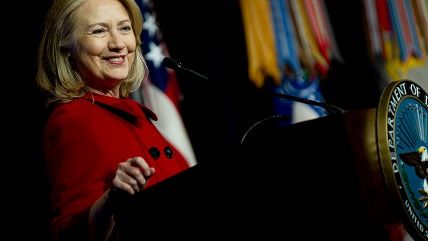 National Journal raises an interesting question about the presumed candidacy of Hillary Clinton: Where does she fall on NSA spying and the mass surveillance state?

Several of Clinton's potential Republican opponents in the presidential election—like Sens. Rand Paul and Ted Cruz—have articulated clear anti-NSA positions, notes NJ. But Clinton, who has been out of office for years, hasn't had to take a vote or make a public statement on the issue in quite some time:

More than a year after Edward Snowden's leaks, the former secretary of State has yet to offer a meaningful assessment of the National Security Agency's mass-surveillance programs. She's had plenty of chances, but in interviews, speeches, and even her new book, Clinton has repeatedly ducked the issue with vagaries and clichés.

The possible 2016 candidate rarely discusses NSA spying unprompted. And when she does, her remarks are often couched in opaque platitudes about the need to balance privacy and national security concerns.

Clinton has occasionally given lip service to NSA reform, though she stopped short of endorsing any actual changes. She has also insisted that Edward Snowden's actions were "outrageous" and emboldened terrorists. Rand Paul, on the other hand, maintains that Snowden's crime pales in comparison with the crimes committed by the state in the name of security. Paul has filed a class action lawsuit against the NSA for violating the civil liberties of all Americans.

Assuming Clinton both seeks and wins the Democratic nomination—something virtually assured at this point—and assuming Paul becomes her chief opponent, the American people may finally be treated to a robust debate between a dedicated opponent of the surveillance state and… someone who has studiously dodged the question at every opportunity.

Given Clinton's hawkish national security views, it would be reasonable to expect that she wouldn't champion NSA reform with the same enthusiasm as Paul, if at all. Despite their party labels, the leading Democrat in the race is likely to the right of the leading Republican on civil liberties issues.