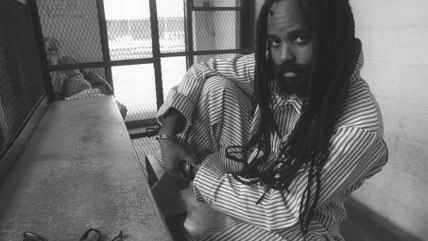 Let us not wade into an argument as to whether Mumia Abu-Jamal is a cop-killer or a victim of a corrupt justice system. Actually, go ahead and wade into the argument if you like. Whether Abu-Jamal is innocent is not actually relevant to this blog post, but the argument surrounding it certainly is.

Pennsylvannia, the state in which Abu-Jamal was born and where his crime took place, passed a law this week that essentially declared that those convicted of crimes no longer have free speech. That is not the stated intent of the law (it never is), but it's absurdly clear it is what has happened. This week Gov. Tom Corbett signed into law a bill that allows victims of crime to go to a judge and stop a convicted criminal from engaging in any "conduct which perpetuates the continuing effect of crime on the victim."

What could that possibly mean? It has to do with Abu-Jamal giving a pre-recorded commencement speech to graduates at Goddard College in Vermont. This apparently shocked the conscience of Pennsylvania's legislature and Maureen Faulkner, the widow of slain officer Daniel Faulkner. So they've introduced a victim's veto. If you've been convicted of a crime in Pennsylvania, you can't say or do anything that makes the victim or victims feel "a temporary or permanent state of mental anguish."

The wording of the law is vague—but makes sure to note that redress involves collecting "reasonable attorney fees and other costs associated with the litigation." Does it mean that a convicted person who continues to protest his innocence in media interviews is breaking the law? The law criminalizes conduct, not just speech. Would asking the Innocence Project for help with your case violate the law? Would doing anything outside of the standard appeals process "perpetuate the continuing effect of the crime"?

The Pennsylvania chapter of the American Civil Liberties Union is not impressed:

"This bill is written so broadly that it is unclear what behavior is prohibited," said Reggie Shuford, executive director of the ACLU of Pennsylvania. "Essentially, any action by an inmate or former offender that could cause 'mental anguish' could be banned by a judge.

"That can't pass constitutional muster under the First Amendment."

They note that that the bill could also put the kibosh on efforts by imprisoned criminals to engage in political advocacy and criminal justice reform, which I suspect is a feature, not a bug. The state's victim advocate, Jennifer Storm, nevertheless insists, "We're not limiting one's free speech. That is not what this bill is about." That is literally what you are doing. This law was passed for the expressed purpose of censoring criminals.