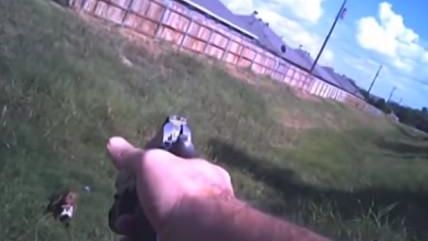 Amanda Henderson of Cleburne, Texas should have made sure her dogs were securely locked up. Otherwise, her six-month-old pit bull, Maximus, might still be alive.

Maximus and two other pit bulls escaped Henderson's property while she was shopping for school supplies for her kids in August. Officer Kevin Dupre responded to a call and shot Maximus several times, killing the pet.

Henderson, who says she never received an explanation of what happened, just came forward to local media about the incident because she recently got her hands on Dupre's body camera, and she says it contradicts his official account of what took place.

You can watch and judge for yourself whether or not the officer's action appeared to be justified. Warning: The video is graphic:

Dupre's police report reads, "I raised my duty weapon to the ready position – pointed at the growling dog's head. As soon as I lifted my pistol, the dog began coming up the hill, continuing to growl and display its teeth…I fired three shots at it."

Henderson sees something different take place. "You see the dogs are happy and playing, they don't even realize [Dupre] is there until he calls them over. They say there's more to the story, but there's no more there. There's no reason he couldn't have used a tranquilizer, pepper spray, a taser instead."

In fact, an animal control officer collected one of Henderson's other dogs without problem. That dog was also caught on Dupre's body camera, trotting right up to the other officer and obeying commands to follow. The third pet was "secured without incident before the shooting" according to the Cleburne Police Department.

Over the weekend, some 10,000 people liked a Facebook page titled "Justice for Maximus," which planned a protest on Saturday.

The police department, which acknowledges it does not train officers to deal with loose dogs, insists that the "the short video" of the shooting "does not tell the whole story" of the dog's "aggressive" behavior toward Dupre. However, yesterday the department announced that it was conducting an internal investigation. And, "we're also talking to another possible, independent, group about doing a review," says Mayor Scott Cain.

The department doesn't know how long the investigation will take, but in the meantime, Dupre is on paid administrative leave as of Friday.