N.H. Cop Involved in Ridiculous and Deadly Drug Bust Could Get Job Back Despite Being Fired for Pattern of Misconduct 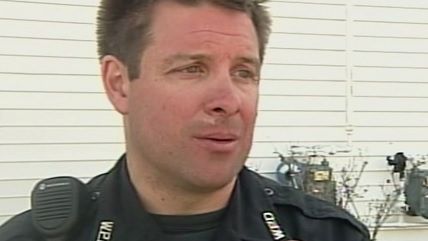 Last year, Officer Joseph Kelley of the Weare Police Department in New Hampshire supervised a drug bust where cops lured a man high on cocaine and heroin to the main thoroughway in town to bust him buying drugs, and then shot and killed him when, they say, he sped his car toward them.

Earlier this year the attorney general's office in New Hampshire decided it did not have enough evidence to prosecute anyone involved in the shooting—among the office's complaints were that cops provided conflicting testimony.

Nevertheless, the attorney general's office and the Weare police chief criticized Kelley for the poor judgment in setting up the drug bust. Kelley went on medical leave for stress related to the shooting. Kelley was fired a few months later after a separate investigation found him lying on time cards, writing bad checks, and getting co-workers to lie, but now, the Concord Monitor reports, Kelley could get his job back after the city decided to rescind his termination by the police chief:

Tom Clow, chairman of the Weare Board of Selectmen, declined to comment on the decision. He said Sunday that the board planned to meet with Broth last night, at which time Kelley's name "may or may not" come up.

The town, which has struggled for months to rebuild the image of its beleaguered police force, is also dealing with domestic violence allegations against its police chief, John Velleca. Velleca, who was hired last fall and who requested Kelley's termination in November, has been placed on paid administrative leave.

It's not clear whether the timing of those claims played any part in the decision to rescind Kelley's termination.

Broth's letter was sent to King and Erin DeRenzis, assistant general counsel for AFSCME Council 93, which represents Weare police officers. In it, he states that the board continues to "expressly" deny any wrongdoing, and that its decision was made "to avoid the time, expense and inconvenience that arise from an arbitration hearing."

Kelley may no get his job back. While the city awarded his back pay (based on him being on worker's compensation for the stress) and rescinded his termination, the city indicated if he returned to work the police department would re-open the internal investigation into the fatal drug bust.

Kelley was previously involved in a case that reached the First Circuit Court of Appeals, after he arrested Carla Gericke for, among other things, recording him (with a camera that didn't work). Prosecutors dropped charges against Gericke but she sued for retaliatory prosecution and violation of her First Amendment rights. The court ruled Kelley couldn't do what he did. That incident was in 2010.