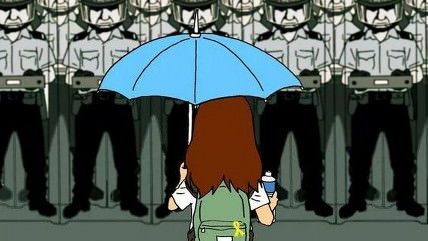 What started as a pro-democracy student strike has turned into an occupation of the central business district in Hong Kong. Originally organized as a rebuke to the Chinese government for their shifty denial of the right of Hongkongers to directly elect their chief executive, the protest has grown demographically, as have the stakes.

Led by by the student group Scholarism and the rare local Occupy outfit with an actual agenda, Occupy Central, tens of thousands of citizens have spent the past several days blocking an eight-lane thoroughfare in the heart of the economic hub of 7 million people. They have been tear-gassed, pepper-sprayed, and the 17-year-old leader of the student group that started the uprising was arrested and held for two days before being released with a standing threat by Hong Kong authorities that more serious charges could be imminent.

As thuggish responses from government agents on unarmed civilians sometimes draw more attention to protests rather than shut them down, the previously unnamed protest is now being referred to as the "Umbrella Movement," umbrellas being the defense of choice among the crowds to protect themselves from the paralyzing toxins being sprayed at them.

As noted by J.D. Tuccille earlier today, the protesters are very conscious of the optics of their movement and are taking pains to be peaceful, eschewing—and even apologzing for—vandalism. The students remian dutiful, doing their homework while maintaining their watch.

For the most part, they are not anarchists, but hard-working and ambitious young people merely demanding the "one country, two systems" they were promised as babies when Great Britain's lease on the city ended and Hong Kong returned to mainland Chinese rule in 1997.

A great many in the Umbrella Movement were not yet alive in May 1989, when thousands of pro-democracy students were slaughtered by police and military in Beijing's Tiananmen Square, but the fear of a bloody reprise is on many minds.

It is also important to note that Beijing has never known anything close to the freedom that Hong Kong residents accept as their birthright. One student made that point to the Huffington Post, saying, "Tell the world what happened to Hong Kong and tell the world China and Hong Kong are different. We are not Chinese, we are Hong Kongese."

You could make the argument that because 2014 Hong Kong's economic importance dwarfs 1989 Beijing's, any sustained clash between citizens and authorities would have far greater global impact. Perhaps that's why the international response has been so muted.

White House spokesman Josh Earnest expressed support for Hong Kong's self-determination but added that he hoped both sides show "restraint," which is an odd response to a violent government's attack on disciplined civil disobedience, and hardly a robust defense of democracy.

Hong Kong's former colonial masters in Britain have done little more than call the Chinese ambassador in for a tête-à-tête and release statements with dispassionate throwaway lines like "Britain and China have solemn obligations to the people of Hong Kong to preserve their rights and freedoms."

The international business community wants no part of a sustained shutdown of Hong Kong's major business artery, and the world's four biggest accounting firms said as much in a joint statement last June:

"If Occupy Central happens, commercial institutions such as banks, exchanges and the stock market will inevitably be affected," the accounting companies said. "We are worried that multinational corporations and investors will consider relocating their headquarters from Hong Kong or even withdrawing their businesses."

Hong Kong Chief Executive Leung Chun-ying has rejected negotiating or even meeting with leaders of the protests, and the Chinese Communist Party's official line is that they trust their man in Hong Kong to deal with the unrest.

For their part, Hongkongers have a history of bold protest and affecting change, as they did in the early in 2003 when they held massive protests against Article 23, an "anti-subversion" law which contained severe curtailments of civil liberties.

The Chinese government is anxious to stamp out trouble spots all over its fraying empire. In Tibet, they are mandating a "happiness" festival; in the restive Xinjiang region, foreign journalists are barred from interviewing ethnic Uighurs; and Taiwan's president rejected a Chinese reunification proposal based on the "one country, two systems" proposal proving so elusive in Hong Kong.

China doesn't need another domestic headache, but they've got one in Hong Kong.

With the Umbrella movement growing in boldness and international stature by the day, who blinks first? And if Tiananmen 2.0 unfolds live on Youtube, what will—or should—any of us do about it?