Once they start, it's hard to stop. 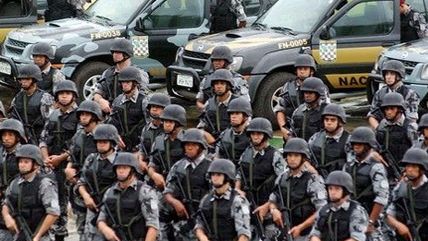 SACRAMENTO — After reporting a few years ago on some troubling jail incidents, I decided to tour various Southern California jails to glean some insight. Most looked like something out of those tense prison movies with well-armed guards and clanking cell doors.

One tour jumped out. It was at an alternative-style jail, where unarmed guards patrolled a facility reminiscent of a community college. The top jailer explained why his guards did not have riot gear and military-style equipment. As soon as an agency buys new "toys," he told me, someone finds a reason to use them.

That conversation jumps to mind as we observe police agencies throughout the country receiving billions of dollars in surplus military equipment that had been used in Iraq and Afghanistan. This trend hit new levels when the San Diego Unified School District  (SDUSD) recently acquired a Mine-Resistant Ambush Protected vehicle for a few thousand dollars in shipping costs from the feds.

It's strange enough that civilian police agencies are grabbing up MRAPs, grenade launchers and the like, but school districts, too? Won't they be eager to find a reason to use them?

SDUSD insists this isn't about the militarization of police — a concept widely debated after the police response to riots in Ferguson, Mo. In fact, the district says the gun mounts were removed, that it's going to paint "search and rescue" on its side and fill it with first-aid kits and even "teddy bears" to tend to traumatized students in case of an emergency. Call it a kinder and gentler tank-like vehicle but SDUSD's acquisition of it still raises questions even if it's true that it costs less to maintain than a family sedan.

These acquisitions are not without controversy. Two northern California sheriff's departments (Napa and San Mateo) have lost some of their military weapons — prompting a temporary shut off of more equipment. In the college town of Davis, City Council members have given the police department a deadline to get rid of its armored truck after many residents complained. San Diego Unified Trustee Scott Barnett publicly complained about the MRAP.

There's a far bigger problem here than a potential waste of resources. Police departments may actually be using the equipment. A June report from the American Civil Liberties Union found that while SWAT teams traditionally had been used for hostage situations and other extraordinary circumstances, they now are routinely used in drug raids and to serve warrants. And such teams increasingly use flash-bang grenades and battering rams — and drive up in former military vehicles.

"As the saying goes, if all you have is a hammer, everything looks like a nail," according to the report. "Likewise, if the federal government gives the police a huge cache of military-style weaponry, they are highly likely to use it, even if they do not really need to."

In the face of congressional inquiries, national police associations have organized to keep the military hardware flowing. Critics say law enforcement's all-in commitment to getting surplus hardware suggests a more fundamental problem in the way police agencies see their role in society.

"The growing militarization of U.S. policing may be threatening community policing," according to the U.S. Department of Justice's COPS (Community Oriented Policing Services) office. "The military's mission is predicated on the use of force" whereas community policing principles "emphasize crime prevention, public approval, willing cooperation of the public, and a minimal use of physical force." Big difference, especially in a democratic society.

Sure, the big one might hit and SDUSD might conceivably have the need to drive an armored vehicle into the rubble. Maybe ISIS will take control of Hollywood High School, and LAUSD will have a use for those guns and grenade launchers. Still, I'd feel better if most of this surplus military equipment were headed toward the scrap yard.