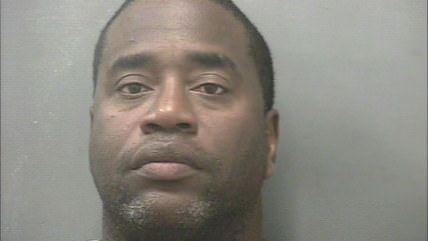 Attempting to serve a search warrant by entering a house through a window got Killeen, Texas, Police Detective Charles Dinwiddie shot in the face and killed last May.  It was yet another SWAT raid organized for a purpose other than the reason they were invented. The police had a search warrant looking for narcotics at the home of Marvin Louis Guy, 49. They decided to serve this warrant at 5:30 in the morning and without knocking on his door. He opened fire on them, killing Dinwiddie and injuring three others.

Though they found a glass pipe, a grinder, and a pistol, they did not find any drugs. Former Reason Editor Radley Balko took note of the deadly raid in May at The Washington Post. A police informant apparently told them there were bags of cocaine inside the house, which sounds a lot like another familiar drug raid in Virginia that got an officer killed.

The Virginia case ended with Ryan Frederick in prison for 10 years despite his insistence he thought he was defending himself against in home intruders. He may end up lucky compared to Guy. Prosecutors in Texas are going to seek the death penalty against him. KWTX offers a dreadfully written summary that says next to nothing about the circumstances of the raid but gives Dinwiddie's whole life story. Guy faces three additional charges of attempted capital murder for shooting the other officers. The story mentions the no-knock raid but fails to explain why it happened or the failure to find any drugs.

A search for Guy in the jail inmate locator for Bell County, Texas, shows that he is being charged only for the shootings. There are no drug-related charges listed. He is being held on a bond totaling $4.5 million.