Actually, Senators, You're the Ones Who Threaten the Country

Americans' right to free speech should not be proportionate to their political power. 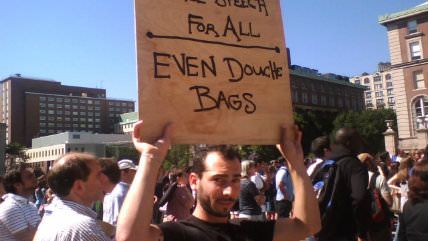 We are, as it always seems, "at a pivotal moment in American history." At least that's what Sens. Tom Udall and Bernie Sanders maintained in a melodramatic Politico op-ed last week as they explained their efforts to repeal the First Amendment.

Let me retort in their language:

It's true that building the United States has been long, arduous and rife with setbacks. But throughout the years, the American people have repelled efforts to weaken or dismantle the First Amendment. We have weathered the Sedition Act of 1918, a law that led to the imprisonment of innocent Americans who opposed the war or the draft. Since then, we have withstood numerous efforts to hamper, chill, and undermine basic free expression in the name of "patriotism." We have, however, allowed elected officials to treat citizens as if they were children by arbitrarily imposing strict limits on their free speech in the name of "fairness."

But nowadays, after five members of the Supreme Court upheld the First Amendment and treated all political speech equally, liberal activists and Democrats in the Senate would have us return to a time when government dispensed speech to favored institutions—as if it were the government's to give.

In 2010, the Supreme Court issued a 5-4 opinion striking down major parts of a 2002 campaign-finance reform law in Citizens United v. Federal Election Commission. This case and subsequent rulings, including McCutcheon v. FEC, have led to more political activism and more grass-roots engagement than ever before. In the 2012 presidential election, we quickly saw the results. More Americans voted than in any election; more minorities voted; more Americans engaged in more debate and had more information in their hands than ever before. More than 60 percent of all those super PAC funds came from just 159 donors, each of whom gave more than $1 million. And still, every vote held the same sway. You may be convinced by someone, but no one can buy your vote. I wish the same could be said for your senators.

Even less worrisome is the propaganda surrounding scary-sounding "dark money"—dollars spent by groups that do not have to disclose their funding sources. The 2012 elections saw almost $300 million spent on engagement in our democratic institutions, and the 2014 midterm elections could see as much as $1 billion invested in political debate. That means more democratization of media and more challenges to a media infrastructure that once managed what news we were allowed to consume. Still, no one can buy your vote.

No single issue is more important to the needs of average Americans than upholding the Constitution over the vagaries of contemporary political life. The people elected to office should be responsive to the needs of their constituents. They should also be prepared to be challenged. But mostly, they should uphold their oath to protect the Constitution rather than find ways to undermine it.

When the Supreme Court finds, for purposes of the First Amendment, that corporations are people, that writing checks from the company's bank account is constitutionally protected speech, and that attempts to impose coercive restrictions on political debate are unconstitutional, we realize that we live in a republic that isn't always fair but is, for the most part, always free.

Americans' right to free speech should not be proportionate to their political power. This is why it's vital to stop senators from imposing capricious limits on Americans.

It is true that 16 states and the District of Columbia, along with more than 500 cities and towns, have passed resolutions calling on Congress to reinstitute restriction on free speech. Polls consistently show that the majority of Americans support the abolishment of super PACs. So it's important to remember that one of the many reasons the Founding Fathers offered us the Constitution was to offer a bulwark against "democracy." Senators may have an unhealthy obsession with the democratic process, and Supreme Court justices are on the bench for life for that very reason.

On Monday, Democrats offered an amendment to repeal the First Amendment in an attempt to protect their own political power. Whiny senators—most of them patrons to corporate power and special interests—engaged in one of the most cynical abuses of their power in recent memory. Those who treat Americans as if they were hapless proles unable to withstand the power of a television commercial are the ones who fear speech. That's not what the American republic is all about.

Editor's note: The proposed amendment went down to a well-deserved defeat in the Senate yesterday.