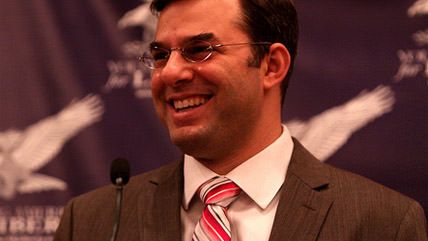 President Barack Obama declared war, or something like it, on the Islamic State (a.k.a. ISIS or ISIL): hundreds of additional ground troops in Iraq, a plea for congressional funding of anti-ISIS rebels in Syria, and more. You can read it all here.

Rep. Justin Amash (R-Mich.) is not happy. He wrote a 300-word response on Facebook. Here's the beginning:

When our government orders our young men and women into harm's way, our leaders have a duty to define the mission, set a plausible strategy, and explain why the risk of our children's lives and our citizens' resources is justified. President Obama has failed to fulfill those obligations.

The president boldly claimed, contrary to the Constitution, that he alone can order our Armed Forces into a protracted war. And he left unanswered the basic questions responsible Americans and their representatives must ask before going to war.

Some of those unanswered questions:

For how long do we expect to put our young people's lives at risk? …

Who are our partners and what resources will they commit? Will the president stop our military involvement at air strikes regardless of how our allies are faring?

Which rebel groups does the president intend to arm in Syria and Iraq? How do we know that those weapons won't be turned against us and our allies?

When will we have accomplished our objectives?

Amash has in the last day been very outspoken about his opposition to getting tangled up in this war, the president's supposed authority to do so, and the hawkishness of a few fellow Republicans like former Vice President Dick Cheney.

He isn't the only one speaking out. As Reason's Robby Soave reports, Sen. Rand Paul (R-Ky.) says this war is technically unconstitutional.

Former Democratic congressman and presidential candidate Dennis Kucinich jabbed at Obama with one his own quotes from 2007: "The President does not have power under the Constitution to unilaterally authorize a military attack in a situation that does not involve stopping an actual or imminent threat to the nation."

Constitutionality aside, who can blame these guys for opposing war with ISIS? After all, the group does not pose a credible threat to the U.S. homeland, according to the FBI, Department of Homeland Security, and members of the House Foreign Affairs Committee.