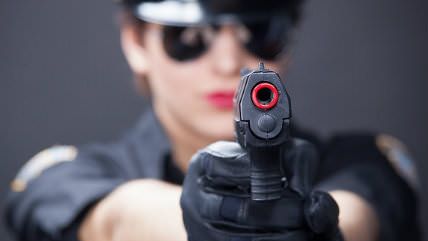 Today The Week is running a piece I wrote about police using excessive force against mentally ill and suicidal individuals.

Reason's Ed Krayewski relayed one such case here last week, in which cops shot a suicidal Kanas teen more than a dozen times despite his lack of apparent weapon and the pleas from his relatives to let them handle the situation. The week before, I highlighted 14 cases of potentially excessive force by cops called in to help with mentally ill individuals this year. Many people responded to that one by asking, "14? Who cares about a measly 14 unnecessary deaths?" But I never said these were the 14 cases, just 14 of the cases from so far this year. I also don't think we should look at these cases as separate from the issues of increasing police militarization, cops' tendency to fatally shoot unarmed black teenagers, and their general propensity to blow everything (tragically) out of proportion.

One common thread in almost all these cases is a lack of police accountability, paired with a departmental statement about how all relevant protocol was followed. If this is what happens when police follow protocol, then perhaps protocol is part of the problem? From my piece at The Week:

About 2,000 communities have implemented what's known as the "crisis intervention team" (CIT) model, a program designed to help officers engage with people with behavioral disorders. There is evidence it can increase the likelihood of an incident's ending with an individual's being transported to health or social services rather than being arrested. It may also "reduce the use of force toward individuals with psychotic disorder." Requiring or encouraging this training might be one important policy change.

If there's anything the events in Ferguson last month brought to light, it's that we have a policing problem in this country. There's just no excuse for how many seemingly defusable encounters end with the use of lethal force. Some blame the growing "militarization" of U.S. police. Others say the root cause is racism, conscious and unconscious, individual and systemic. I'd like to add that our inability to recognize and respond appropriately to mental illness is also worth investigating. But no matter which of these ills we're examining, we come back to a fundamental disconnect between how your average American sees the role of community police and how these police see themselves.

We think cops can be called in to defuse situations — to calmly handle public disturbances, investigate suspicious activity, keep the streets safe, even help get a daughter having a manic episode to the hospital or subdue a son threatening suicide. But many cops seem to see themselves largely as drug warriors and fee collectors, keeping peace by instilling fear and using force.