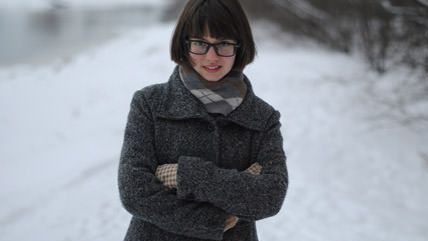 As Vladimir Putin burns bridges and makes his country increasingly unpopular internationally over his instigation of war in Ukraine, polls have shown that the Kremlin leader's domestic approval rating has climbed to a staggering 88 percent.

There's been plenty of analysis of this surge noting Russians' desire to return to the glory of the good ol' Soviet days, but some are skeptical and believe there are other reasons people are ostensibly uncritical of their government. Perhaps the person who understands this best is Russia's most prominent libertarian activist, journalist, and elected official, Vera Kichanova. (You can read her Reason interview here.) Yesterday, she penned an article in Forbes detailing the opposition and the chilling effects of the government has on it:

Not all of us Russians believe Vladimir Putin's propaganda machine. While the Western media broadcasts images of pro-Kremlin protesters supporting Russia's military actions in Ukraine, rarely are anti-war demonstrators like myself mentioned. In March, 50,000 of my fellow countrymen went out in the streets of Moscow, holding Russian and Ukrainian flags side-by-side, in protest of our government's aggressive actions in Crimea.

Kichanova states that Putin does have support from many, but it is generated by misinformation spread through Russia's sizeable state-owned media.

According to a new law that Vladimir Putin has just signed, anti-war Russians like myself risk receiving up to five years in prison for speaking out about the innocent people being killed with our taxes. Previously, participating in a non-permitted rally was an administrative infraction. Now, if a protester is detained in a demonstration for the second time, he or she becomes a criminal. I myself have been arrested six times for peacefully protesting, once as a reporter. I had all my documents with me, but the police simply ignored the fact I was doing my job. With propaganda gathering momentum and taking its terrible toll, opportunities for real journalism are gradually disappearing as lies force out the truth.

Indeed, a tragedy that's being widely overlooked by the West during the Ukrainian war is the crackdown on Russia's domestic political opposition. Russia, which has already been ranked by Freedom House as "not free" and has a notoriously high death rate among journalists, recently introduced a law requiring bloggers to register with the government and another prohibiting people from accessing the Internet anonymously. Earlier this month, Russian prosecutors gave Slon, a news site for which Kichanova writes, a 24-hour notice to remove one of her articles about anti-Kremlin separatists in Siberia. One of the nation's most vocal anti-corruption advocates and politicians, Alexei Navanly (whom I speculated could become "the Ron Paul of Russia" in an article here), has also been censored by the Putin regime. In the newly-Russian Crimea, the native Tatars' political leaders have been exiled for spurious reasons.

For more Reason coverage of the conflict in Ukraine and related issues, click here.