Contain Your Shock: Huge Numbers of People on Watch Lists Have No Connection to Terrorist Groups 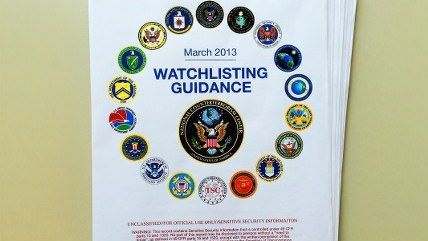 This will not come as a surprise to Reason regulars: More than 40 percent of the people on the United States federal government terrorism watch lists have no discernable connection to any terrorist group.

280,000 out of 680,000 people on the list of those whom authorities are keeping their eyes on and pulling aside for further examination at airports and border crossings have no actual connection to terrorist groups. The analysis comes from journalists Jeremy Scahill and Ryan Devereaux at The Intercept. They just recently exposed the complicated yet also terribly vague guide the federal government uses to put people on the list. Now they've gotten their hands on a classified document detailing the National Counterterrorism Center's (NCTC) list of accomplishments for 2013 and have crunched the numbers to provide the lovely graph below:

Some of the other interesting details:

There are a lot of different numbers about the actual size of the list. The Associated Press has reported the list has seen 1.5 million names added, but a source told The Intercept there's some confusion between new names being added and new data about people already on the list being added.

But the first thing this report for 2013 (pdf) describes as an "accomplishment" is adding its one millionth person to its database:

On 28 June 2013, the Terrorist Identities Datamart Environment (TIDE) passed a milestone of one million persons in TIDE. While NCTC's Directorate of Terrorist Identities (DTI) seeks to create only as many person records as are necessary for our nation's counterterrorism mission, this number is a testament to DTI's hard work and dedication over the past 2.5 years.

It's a monument to the twisted incentives that drive bureaucracies. Having a watch list of a million people is considered an accomplishment even though it contains hundreds of thousands of people with no known ties to terrorist groups.

Read the latest story here. Below, Reason's Nick Gillespie interviewed Devereaux about their last report detailing the guiding document for the watch lists: