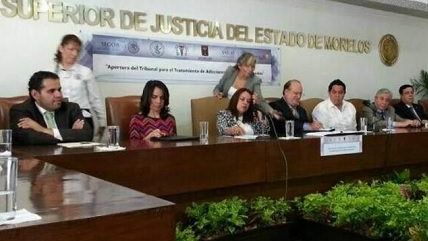 Mexico's federal government opened its second drug court, a "Court for Treatment of Addictions," in the state of Morelo. (The first opened in Nuevo Leon in 2009.) These kind of courts are seen as an alternative that treats drug use as a public health issue but stop well short of legalization.

Supporters tout the initiative as a money-saver, claiming that sending an inmate through rehab requires a tenth of the cost of jailing them. One government official, a director of a citizen crime prevention program, admitted to the Pan Am Post that the results promised when the first drug court opened, like lower crime rates, haven't been seen yet, but he insisted the new government intends on opening many more. Other critics of the government's drug policies aren't sure that's wise. The Pan Am Post reports:

The Association for a Fundamental Drug Policy (CUPIHD) also dismissed the initiative's potential benefits, based on the experience with Mexico's first drug court…."In the case of Monterrey city, there hasn't been a significant decrease in the crime rate. From the first 103 people admitted [into the drug court], only 18 finished their treatment, despite the strict admission criteria."…

For Marcelo Arteaga Mata, coordinator of Students For Liberty (SFL) in Mexico, this new drug approach "won't affect in a substantial way the basic drug problem in Mexico."

Regarding the effect of the hoped-for decrease to drug use on crime rates in Mexico, Arteaga believes the impact will be very low. The majority of crimes committed in Mexico are related to drug trafficking, he points out, not as a consequence of substance abuse.

In a 2012 article for Reason, Mike Riggs surveyed the many pitfalls of drug court system in the U.S. and pointed out how they could undermine legalization efforts. And how are those legalization efforts faring in Mexico? Former Mexican president Vicente Fox, who pushed for decriminalization while in office, later came out in support of legalization. But Fox's successor Felipe Calderon, who took offie in 2006, escalated his country's war on drugs. His successor, Enrique Nieto, who took office in 2006 (Mexican presidents serve one six-year term), has said he welcomes a "broad debate" on legalization, and legislators in Mexico City are still moving toward trying to legalize marijuana in the nation's capital. Only the country's left-wing party, the third largest and in control of the capital, currently appears to be willing to push for more liberal marijuana laws in Mexico. Fox was a member of the center-right National Action Party and so was the drug warrior Calderon.