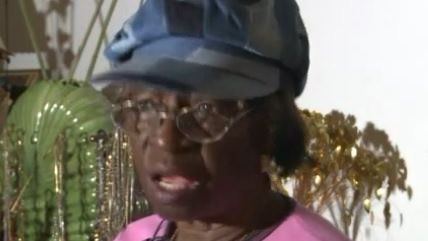 Seventy-five-year-old Ruth Hunter says in the six years she's lived in an apartment complex in Henrico, Virginia, she's largely kept to herself. She says even her granddaughter doesn't like to come to visit there. Earlier this month though, State Police did visit, with a warrant authorizing a search for drugs. Hunter says she thought someone was trying to rob and kill her when she heard police opening the door. She says the cops tied her hands up and told her she was under arrest. Via local CBS affiliate WTVR:

She said she was shocked at the line of questioning from State Police, on the morning of April 10.

"Asked me if I ever stored drugs for anybody—I said how dare you insult my integrity."

Hunter said that is when police started asking about her loved ones.

"He asked if maybe my granddaughter was involved. I sat up in my bed like how dare you try and bring my granddaughter into this stuff. She's a law abiding citizen, works for a living, she don't even like coming here," Hunter said.

Cops apparently ended up making an actual arrest, two doors down. Hunter says they left her tied up when they went down the hall to make that arrest. No drugs were found in Hunter's home, but her address is the one that appeared on the warrant. A woman in the house where the arrest was made suggested someone mixed up Apartments E and G, the two that cops visited.

State police won't comment because of the "ongoing investigation." Hunter plans on moving out, and says she's upset with the police. "He never said I'm sorry, never apologized for having the wrong house," she told WTVR. "He said you got to get someone to fix that door."