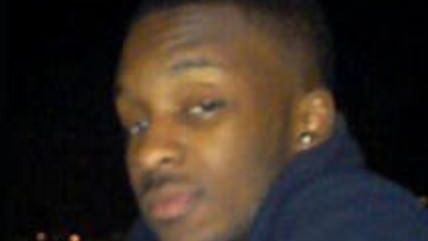 Who is the criminal element here? Via the Philadelphia Inquirer:

20-year-old [Philippe Holland] from Upper Darby had been running orders two nights a week for Slices & More for a few weeks. That was on top of another job at an airport restaurant.

Maybe he had heard the gunshots two blocks away—the ones two plainclothes officers were responding to—when they attempted to stop him just before 10 p.m. Moments later, they riddled the Taurus with 14 shots.

Holland was struck at least three times, in his neck, a leg, and his head. He was in critical but stable condition late Wednesday at the Hospital of the University of Pennsylvania.

The officers would later tell investigators that they had identified themselves as police. Maybe Holland heard them.

Or, as Commissioner Charles H. Ramsey said, maybe he didn't, and thought he was about to become a victim in a neighborhood where gunshots are not uncommon and robberies of deliverymen are a constant threat.

Ramsey suggested Holland may have thought he was being robbed, a reasonable assumption, especially when your job involves carrying around cash and you are confronted by armed gunmen. Police say he had a hoodie on and his hands in his pockets when they approached him. Holland survived the shooting and is in the hospital, and Ramsey hopes police can talk to him.

A spokesperson for the Philadelphia Police Department told the Inquirer the department has a policy against shooting at moving vehicles, although he also said he wasn't there so he couldn't say if they were right or wrong. In the real world, it would seem pretty clear if a rule says don't do that, than doing that meant you were, according to the rules, wrong. The spokesperson admitted cops getting in the way of a moving vehicle would not be "tactically sound."

Court records indicating Holland had a recent minor run in with the law (over allegedly throwing a cellphone at his girlfriend) are already being reported. But the names of the officers involved have not yet been released.