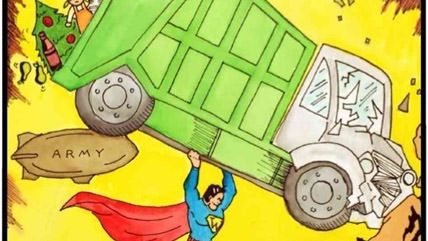 The National Technology Information Service (NTIS) will sell you a paper copy of the federal government's budget for a hefty $215 fee. Or you can just find a digital copy online for free. This is ridiculous, notes a bipartisan group of lawmakers who want to eliminate the service. And they're doing it with some snark.

Sen. Tom Coburn (R-Okla.), known for his annual Wastebook on government spending (available for only $48 by NTIS! Or free at Coburn's own site.), issued a press release last week saying that he and Sen. Claire McCaskill (D-Mo.) are sponsoring "a bill to eliminate an outdated agency that has lost more than $1 million trying to sell government reports that are available for free online." And it's been bleeding all this money for about a decade.

Reiterating this sentiment, Rep. Jim Bridenstine (R-Okla.) said, "Only the Federal Government would attempt to sell what you can get for free, make no money, then subsidize the failure." He is one of the sponsors for the corresponding House bill.

The NTIS may have been able to fulfill its objective of "collect[ing] and preserv[ing] scientific, technical, engineering and other business-related information from Federal and international sources, and disseminates it to the American business and industrial research community," when the agency was founded in 1950, but it can't compete with free services in the Internet age.

Humorously, Coburn and company are calling it the "Let Me Google That For You" Act. The bill highlights some damning data:

(A) "Of the reports added to NTIS's repository during fiscal years 1990 through 2011, GAO estimates that approximately 74 percent were readily available from other public sources.".

(B) "These reports were often available either from the issuing organization's website, the Federal Internet portal (http://www.USA.gov) or from another source located through a web search."

(C) "The source that most often had the report [GAO] was searching for was another website located through http://www.Google.com."

(D) "95 percent of the reports available from sources other than NTIS were available free of charge."

Apparently, NTIS has even been charging other federal agencies for otherwise free information in order to cover its losses. The agency does still have a few meaningful services, but not enough to warrant a whole agency. The bill would transfer these functions to NTIS's parent agency, the Department of Commerce.

Although Coburn's bill seems like a no-brainer in cutting down on federal waste, USA Today notes that "President Obama's proposed 2015 budget recommends growing the agency from $67 million to $86 million—presumably through increased user fees."