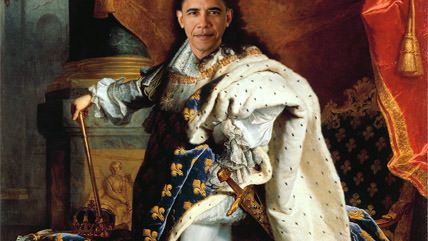 "'Imperial Presidency' Becomes a Rallying Cry for Republicans," the New York Times headline blared in a story in the April 1 print edition. But the Grey Lady wasn't fooling: it's the GOP's "unified anthem" for 2014, reflecting "conservative philosophy about the appropriate role of government."

House Majority Leader Eric Cantor (R-Va.) is leading the charge. In March, he released an updated white paper on "The Imperial Presidency," and helped shepherd the adroitly acronymed ENFORCE the Law Act (for "Executive Needs to Faithfully Observe and Respect Congressional Enactments") through the House.

The bill, which tries to compel the courts to rule on issues like the president's repeated flouting of Obamacare deadlines, was necessary, Cantor insisted, because "the president's dangerous search for expanded power appears to be endless."

I've long argued that the right should rediscover its historic skepticism toward executive power, so the Republicans' new tune should be music to my ears. But while it's got a nice beat, I'm not sure I can dance to it.

For one thing, the GOP's latest legislative nostrum won't force President Obama to care about his duty to "take Care that the Laws be faithfully executed." As the Cantor report describes it, the ENFORCE the Law Act "mandates that the courts set aside their own court-created standing rules and… prevents courts from using procedural excuses" to avoid "important separation of powers cases."

In other words, it subverts separation of powers principles in an attempt to enforce them. The courts are unlikely to comply.

What's more, the Cantor Report mixes legitimate concerns with bogus and trivial ones: It condemns the administration's "extraordinary step" of refusing to defend the Defense of Marriage Act in the courts and "leaving that job to Congress." There's nothing especially "extraordinary" about that; President George H.W. Bush and President Clinton, among others, refused on occasion to defend statutes they considered unconstitutional, something the presidential oath arguably requires.

Also among the president's imperial sins, per the report: Obama "refused to abide by a statute requiring his State Department "to record ?Israel' as the place of birth on passports for U.S. citizens born in Jerusalem." Cantor fails to mention that it was President George W. Bush who first refused to abide by that requirement—correctly, according to the U.S. Circuit Court of Appeals for the D.C. Circuit, which struck it down last year.

The GOP's latter-day anti-imperialists are absolutely right that Obama's "royal dispensations" in the areas of health care and immigration undermine the rule of law.

Still, surely his administration has provided more terrifying examples of executive unilateralism than the refusal to deport otherwise law-abiding people whose parents brought them here as children and the decision to delay the implementation of a scheme the GOP's denounced as socialism.

In his imperial parade of horribles, Cantor finds room for "withholding critical information about counterfeit goods"–but says nothing about major executive power abuses like illegal wars and dragnet domestic surveillance.

And when Rep. Justin Amash (R-Mich.) moved to defund the National Security Agency's bulk collection of innocent Americans' calling records, Cantor threatened to kill the bill on a procedural technicality.

Ninety-four House Republicans later voted to end the program; Cantor wasn't among them. On these core Imperial Presidency concerns, the GOP rank-and-file are better than their leadership. They could use a better standard bearer.

This column originally appeared in the Washington Examiner.