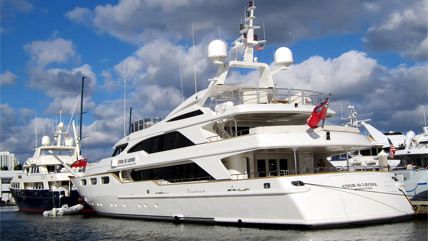 Colin and Andrea Chisolm don't seem like typical welfare recipients. Court documents state that he is the former chief executive officer of a company and she a pedigree dog breeder. They allegedly drove a Lexus and lived on a million-dollar yacht off the coast of Florida. Minnesota prosecutors found it fishy that the Chisolms were apparently also collecting thousands in public assistance.

According to the criminal complaints, over the years, the Chisholms received medical assistance, welfare payments and food stamp benefits. They also lied about where they were living, who they were living with and their source of income on more than a dozen forms they filled out for the state of Minnesota and Hennepin County in order to get the assistance.

When they first applied for welfare benefits, the couple listed their residence as Andrea's mother's home in Minneapolis, when they really owned a luxury home in Deephaven. However, shortly after getting approved for benefits, they moved to Florida. They remained in that state for at least 28 months, first on their $1.2 million yacht, and then moving to a house, officials said. They collected welfare from Florida, as well as Minnesota during that time, which people are prohibited from receiving simultaneously.

Prosecutors claim that this went on from 2005 until 2012 and that the Chisolms siphoned $165,000. The couple is "charged with a one count of wrongfully obtaining public assistance more than $35,000, a felony," according to Fox News.

Libertarians get a lot flak for expressing skepticism about the welfare. They are assumed (or outright accused) of hating the poor and wanting to take away their means of survival. The case brought against the Chisolms does not discredit honestly down-and-out people, but it is glaring reminder of the system's vulnerability to fraud.

Bonus: The Chisolms also apparently pretended to be British aristocrats. It's like they knew the plot of American Hustle a decade in advance.