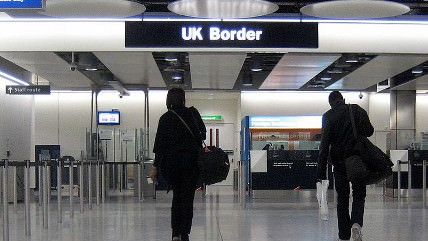 A group of Conservative MPs are urging the British government to adopt a different approach to immigration and to abandon its pledge to cut net migration to the U.K. to below 100,000 people a year. The group, Conservatives for Managed Migration, which according to the BBC claims to have the support of "up to 20" Conservative MPs, is led by Mark Field MP, who said in a statement on his website that his party is perceived as hostile to immigration despite the fact that "many immigrants in Britain demonstrate just the kind of vision, enterprise and family values that would make them natural Tory voters." Field adds, "There are many minority and migrant communities who are bursting with the sort of entrepreneurial vision and family commitment that should make them natural Conservatives – but they are hardly going to embrace our Party us if we rarely seen to embrace them."

Given the state of British opinion on immigration it shouldn't be surprising that The Telegraph's Political Editor James Kirkup wrote that there are Conservative ministers "who agree entirely with the group's aims, but don't dare so in public." It is also telling that so far, of the 303 Conservative members of parliament, only "up to 20" support Field's new group.

This is shame, especially considering that the Conservative Party is supposed to support free markets. As I argued back in January, there is an inconsistency in believing in the free movement of goods but not of people. But with public opinion the way it is, there is little chance that Conservative members of parliament who understand the benefits of immigration and the free market will publicly criticize the government's attempt to bring down net migration. This is unfortunate, considering that the argument can be made that recent immigrants are net contributors to public finances and drive down housing prices.

Below is a graph illustrating British net migration from June 2004 to September 2013 (British Prime Minister David Cameron wants to reduce met migration to the U.K. to below 100,000 people a year):