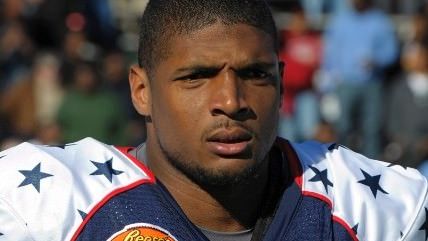 Michael Sam, a defensive lineman at the University of Missouri and top N.F.L.  prospect, has just become a household name. While he has been known in the college sports world as an outstanding athlete, his new notoriety comes not solely because of his football talent but because he publically announced on Sunday that he is gay. Though Americans have become increasingly tolerant and supportive of homosexuality, many people can't help but wonder whether Sam has damaged his career prospects by coming out in advance of the NFL draft.

However, the Reason-Rupe poll finds that instead Americans don't really care if their favorite athlete is gay. Seventy-seven percent of Americans say it wouldn't make a difference and another 10 percent say they would be even more likely to support their favorite athlete. Only 12 percent say they would be less likely to support a favored sports player who came out as gay.

The National Football League has released a statement that echoes the feelings of most Americans: "We admire Michael Sam's honesty and courage. Michael is a football player. Any player with ability and determination can succeed in the N.F.L. We look forward to welcoming and supporting Michael Sam in 2014." But it remains to be seen whether Sam's announcement will have any impact come draft time. Jason Collins, a former NBA player, announced that he way gay after the last season ended. Now a free-agent, he has yet to be signed by another team, although NBA commission Adam Silver says this isn't related to his sexual orientation.

But for now, Michael Sam is feeling good. The New York Times reports that for Sam, "coming out to his team was a positive step, on a path that seems as if it will lead to the N.F.L." The Reason-Rupe telephone poll of 1,003 Americans finds that 25 percent think having an openly gay professional athlete would be a positive development for society while most, 57 percent, say it wouldn't make much of an impact either way.

Full details on the Reason-Rupe poll can be found here.