US Senior Diplomat: "Fuck the EU" 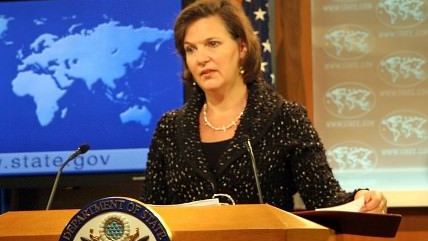 Yesterday, a telephone conversation between Assistant Secretary of State for European and Eurasian Affairs Victoria Nuland and U.S Ambassador to Ukraine Geoffrey Pyatt was leaked on Youtube. In the conversation, Nuland and Pyatt discuss particular opposition leaders and the role of international bodies in resolving the ongoing crisis in Ukraine.

A Russian official has denied that he or the Russian government had anything to do with leaking the recording, although he did say that he posted the video after finding it on a social media site.

At the beginning of the call Nuland and Pyatt discuss opposition leaders Vitaly Klitschko, Arseniy Yatseniuk, and Oleh Tyahnybok. Nuland says that she does not think that Klitschko should be part of the government.

The next section of the call, in which Pyatt and Nuland discuss the United Nations and the European Union, is what has been making headlines (transcript from the BBC):

Nuland: OK… one more wrinkle for you Geoff. [A click can be heard] I can't remember if I told you this, or if I only told Washington this, that when I talked to Jeff Feltman [United Nations Under-Secretary-General for Political Affairs] this morning, he had a new name for the UN guy Robert Serry did I write you that this morning?

Pyatt: Yeah I saw that.

Nuland: OK. He's now gotten both Serry and [UN Secretary General] Ban Ki-moon to agree that Serry could come in Monday or Tuesday. So that would be great, I think, to help glue this thing and to have the UN help glue it and, you know, Fuck the EU.

Nuland has apologized for the comment, and speaking about the recording said that "the tradecraft was really quite impressive." Understandably, Nuland's blunt assessment of how useful the E.U. will be in a solution to the crisis in Ukraine has upset at least one already irritated U.S. ally.

German Chancellor Angela Merkel, who has been critical of the NSA's behavior in the wake of Edward Snowden's revelations and whose phone was reportedly tapped by the intelligence agency, has condemned Nuland's comment.

While obviously crudely put and diplomatically embarrassing, Nuland's frustrations relating to the E.U.'s diplomatic influence is understandable. The protests in Ukraine began after the government there decided not to sign a trade deal with the E.U. that some think would have hurt the Russian economy. As the BBC's Jonathan Marcus notes:

Not for the first time in an international crisis, the US expresses frustration at the EU's efforts. Washington and Brussels have not been completely in step during the Ukraine crisis. The EU is divided and to some extent hesitant about picking a fight with Moscow. It certainly cannot win a short-term battle for Ukraine's affections with Moscow—it just does not have the cash inducements available. The EU has sought to play a longer game; banking on its attraction over time. But the US clearly is determined to take a much more activist role.

Moscow has been openly critical of the E.U.'s role during the crisis in Ukraine. Russian President Vladimir Putin has criticized the E.U.'s diplomacy in Ukraine, and Russian Foreign Minister Sergei Lavrov said earlier this month that E.U. politicians were encouraging violent protests.