Give America a Raise?

Since when does Congress have the power to do that? 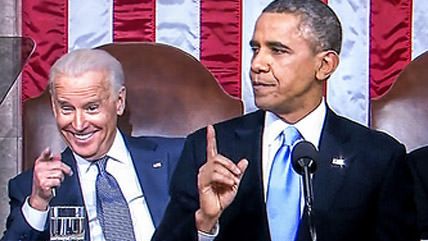 President Obama said something especially perplexing when he implored Congress during his State of the Union address to "Give America a raise."

Since when does Congress have the power to do that?

Obama of course was calling on Congress to raise the minimum wage from $7.25 to $10.10 an hour. But the Bureau of Labor Statistics says that only 4.7 percent of hourly workers made the minimum wage or less in 2012, so those 3.6 million people hardly constitute "America."

Can Congress give those workers a raise? No, it can't.

As economists say, "Demand curves slope downward." This means simply that when the price of something rises, the quantity demanded (other things equal) falls. You know this: You are likely to buy fewer oranges or go to the movies less often when the price rises. This doesn't mean no one will continue to buy their usual quantity (and thus give up something else), but many people will curtail their purchases. It's called economizing.

Labor is a service that employers purchase from workers. It follows that if its price rises because of a government decree, employers will buy less. The minimum wage is directed at low-skilled workers. If government sets or raises the minimum, employers have an incentive to use fewer low-skilled workers; employers will substitute machines where possible (have you seen how automated fast-food restaurants are these days?) or switch to higher-skilled workers. The minimum wage, therefore, harms the people most in need. Some lose jobs, and others looking for jobs won't find them. That is not the only consequence. Some workers might retain their jobs but find that some benefits have vanished: there may be less on-the-job training and fewer workplace amenities.

Most people, including advocates of the minimum wage, understand that a rising price generally discourages purchases. People who want to discourage smoking believe that higher cigarette taxes will accomplish that objective. So why is the pricing of unskilled labor an exception? Is ideology interfering with reasoning here?

Apparently even economists can have their good sense clouded by ideology. If someone believes that a $10.10 hourly wage wouldn't throw vulnerable people out of work or otherwise make their situations less desirable — and that, indeed, it would even be good for business — the advocate of the higher minimum ought to explain why the wage hasn't already risen to that level through normal market forces. Why is it stuck at $7.25? Shouldn't competition be expected to raise the wage if a higher wage is economically justified?

This question is even more interesting when you consider that the higher-minimum lobby points to Costco's success in paying its starting workers $11.50 an hour. Why isn't self-interest driving other employers to offer the higher wage? Their alleged stubbornness contradicts the self-interest model of business owners. If Costco palpably helps its bottom line by paying its workers more, every similar employer should be copying that policy.

The standard economic argument against legislating a minimum wage is that no worker who is unable to produce an equivalent amount of value will find a job at that wage. So any wage mandated above the market-set level would harm the very people that the mandate is supposed to help.

We can see the logic of this argument while recognizing that markets, being composed of people (who in fact don't only care about money), never respond infallibly and instantaneously. Moreover, it may be difficult to ascertain what a given worker's contribution is, so it's possible that he or she might be paid less than is economically justified. But none of that supports a government mandate.

The only way to maximize the market's tendency to accurately reward people for their productivity is to remove all government barriers to competition and self-employment. This includes occupational licensing, land-use restrictions, permitting, intellectual property, and more.

Alternatives, not political machinations, are what maximize workers' clout and ensure their just reward.

This column originally appeared on the Future of Freedom Foundation.