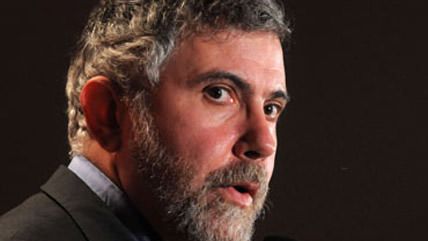 Some Democrats seem to think that the very fact "inequality" even exists should be enough to lure the entire nation to the progressive cause. New York Times columnist Paul Krugman, in a recent piece imploring President Barack Obama to put emphasis on social justice in his State of the Union speech, argued as much, writing that "to focus on inequality is political realism. Like it or not, the simple fact is that Americans 'get' inequality; macroeconomics, not so much."

They may "get" it, but the message is probably a lot less powerful than Krugman imagines.

The latter revelation is so awesome that Krugman punctuated it with an exclamation point. But really, why wouldn't most people want to "do something" to diminish this appalling rise in "inequality" they've been hearing about on the news every day for years? How wide the disparity really is—and how much it really matters in alleviating poverty—I'll leave to economists and the good citizens of the income-parity wonderlands of Laos and Bulgaria.

As with all things, wanting to "do something" will mean an array of contradictory policy measures. It is not, sorry to say, as easy as the false choice Pew ultimately offered in its poll: Do you want to raise taxes on the wealthy or do nothing? In fact, Pew might have done well to add another, more germane, question. Something along the lines of:

Which do you believe is a more effective way to reduce poverty, implementing policies that further redistribute wealth and close the inequality gap or fostering policies that create more class mobility for Americans?

Because poverty is not "inequality." Not even if Obama conflates the two, as he did recently when he argued that "a dangerous and growing inequality and lack of upward mobility" is the "defining challenge of our time." Democrats tether inequality and mobility because they, no doubt, realize that one still matters more than the other. Without a zero-sum fallacy to rely on, explaining why inequality is so "dangerous" isn't easy. And Americans don't believe, as Obama seems to intimate, that the poor are stuck in their circumstance without government.

As it turns out, new data—data that Obama is unlikely to share with Americans—show that little has changed over the past decades when it comes to mobility. The Equality of Opportunity Project's new study by economists Raj Chetty and Emmanuel Saez found that despite perceptions, social mobility in the U.S. is at the same level it was 30 years ago. Economists measured the ability of kids born in 1971 to 1993 to move into different income groups and found that a child born in 1971 in the bottom 20 percent of household earners had an 8.4 percent chance of ending up in the top 20 percent of earners by the time they hit their 30s. The chance of a child born in 1986 finding himself/herself on the same trajectory was slightly higher, at 9 percent. The strongest predictor of upward mobility, it turns out, is one that conservatives have been touting for years: Getting married—not higher levels of "social justice"—is the key predictor for success.

Granted, that mobility number could be a lot better. And it seems that movement is more compartmentalized today than it used to be—as success breeds success and vice versa. The report states that America is probably better described "as a collection of societies, some of which are 'lands of opportunity' with high rates of mobility across generations, and others in which few children escape poverty." So treating "the poor" as one entity rather than making distinctions among working-class families that have fallen on hard times, those stuck in the cultural continuum of poverty and those who need society to bail them out of bad choices might be good populist politics, but it's lousy for policy.

Yet in the political class's arms race on empathetic political rhetoric, it's starting to sound as if we don't believe that anyone in any of those groups can help himself anymore. This is a perverted view of the American experience. It's also false.