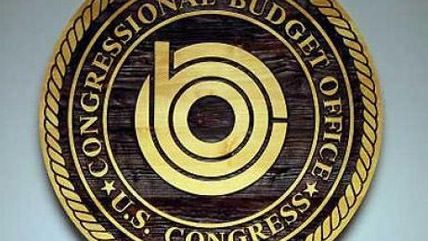 The U.S. government has racked up $12 trillion in public debt, a figure equivalent to nearly three-quarters of gross domestic product. Yet that massive sum pales in comparison to the costs of the federal government's unpaid promises, mostly in the form of health care and retirement benefits for seniors.

Although future commitments are not scored by the nonpartisan Congressional Budget Office (CBO), this off-the-books "fiscal gap" is real debt. Economists and lawmakers of all stripes are coming to recognize the need for honest fiscal-gap accounting. In July 2013, Sens. Tim Kaine (D-Va.) and John Thune (R-S.D.) introduced the Intergenerational Financial Obligations Reform (INFORM) Act, which would require the federal government to disclose unfunded obligations.

Estimates of future obligations vary. In 2012, using data from the Medicare and Social Security trustees, former Securities and Exchange Commission chairman Chris Cox and former House Ways and Means Committee chairman Bill Archer estimated that the U.S. faces an $86.8 trillion fiscal gap over the next 75 years. That same year, Cato Institute economist Jagadeesh Gokhale measured the gap using an approach he developed with the Wharton economist Kent Smetters. Under the CBO's baseline scenario, which assumes that certain federal laws will remain unchanged, Gokhale found a $54.4 trillion fiscal gap. Applying the same methods to the CBO's "alternative fiscal scenario," in which current tax and spending policies are assumed to change consistent with previous congressional practice (as opposed to the feckless promises of current politicians), Gokhale reports a $91.4 trillion gap.

Another estimate comes from James D. Hamilton, an economist at the University of California at San Diego. In a paper published last year by the National Bureau of Economic Research, Hamilton calculated the total value of off-balance-sheet federal liabilities, including housing support, loan guarantees, deposit insurance, Federal Reserve liabilities, and federal trust funds for social insurance programs. His total came to $70.1 trillion for 2012, six times larger than the on-the-books debt of $11.3 trillion.

Even those alarming figures are dwarfed by the numbers in a forthcoming paper that the Boston University economist Larry Kotlikoff wrote for the Mercatus Center at George Mason University. Kotlikoff calculates the current fiscal gap at roughly $200 trillion.

The variation among the estimates can be explained by different assumptions and methods. Cox and Archer simply added unfunded liability burdens-from programs such as Social Security, Medicare, and the federal employee pension system-to the "official" debt of $15.96 trillion reported in 2012. (Due to Hamilton's methodology, some portion of the official $15.96 trillion debt is counted in his unofficial total debt, so his "on-the-books" debt only amounts to $11.3 trillion.) Gokhale arrived at his estimate by subtracting the total present value of projected federal expenditures and total federal assets from the total present value of projected revenues.

The policy fix for the fiscal gap depends heavily on how you measure it. Using Gokhale's numbers, the federal government would need to either dramatically raise taxes or dramatically cut spending to eliminate the future imbalance. Using only tax increases, all taxes would need to increase by 25.5 percent under the baseline scenario; under the alternative fiscal scenario, they'd have to go up by 50.3 percent. (If you wanted to raise the funds with the income tax alone, it would have to go up 40.2 percent under the baseline scenario or 86.3 percent under the alternative scenario.) Relying only on spending cuts for Gokhale's gap would require a 21.3 percent decrease in spending under the baseline scenario or a 35 percent decrease under the alternative scenario. If you use Kotlikoff's calculations, closing the gap would take an increase in all federal taxes of 54.8 percent or an immediate and permanent 36.2 percent cut in nonÂ­interest federal spending.

Every estimate of the fiscal gap suggests that fast and fundamental reform is necessary to avoid catastrophe. The longer we wait to make fiscal adjustments, the more drastic the changes will have to be.

Because of the size of the burden, even minor government tweaks can have huge effects on the long-term numbers. In a December 2012 interview with Real Clear Politics, for instance, Kotlikoff estimated the fiscal gap at $222 trillion, $22 trillion more than in his upcoming Mercatus paper. The difference is mostly the result of two relatively small policy changes: the March 1, 2012, sequestration cuts (which reduced the growth of spending over nine years), and the January 1, 2012, fiscal cliff deal (which, among other things, increased the top marginal tax rate to its Clinton-era level and allowed the expiration of a 2 percent payroll tax cut implemented in 2010).

Needless to say, policy changes can push the total up as well. In 2005 Smetters and Gokhale estimated that the gap had grown by nearly $20 trillion since 2002, thanks largely to the Medicare prescription drug entitlement championed by President George W. Bush.

There is another change that could drastically affect the fiscal gap numbers. When the Social Security trust funds run dry (which is currently projected to happen in 2033), the program is required by law to revert to a pay-as-you-go system, meaning that total benefits cannot exceed payroll tax revenue in any given year. Current estimates assume that the resulting reductions in benefits could be as steep as 25 percent. Yet most of the numbers cited above assume that Congress will change the law so that these cuts never go through. That assumption may be wrong.

Even without taking the full fiscal gap into account, the CBO's more realistic extended alternative baseline projects that our debt level will explode from 73 percent of GDP today to almost 200 percent of GDP by 2038. It may not be realistic to assume that Washington will maintain the status quo. In 1983, when the Social Security program was in dire financial straits, Congress enacted reforms that included tax increases, retirement-age increases, and benefit changes. Additional changes like those would reduce the fiscal gap significantly.

For years lawmakers have been making promises without having to pay for them, and they have managed to keep the resulting debt off the books. Now the pressure is mounting to at least change the way we account for future obligations. Transparency is a small but necessary first step.