Harry Reid OK With Medical Marijuana, Partially Because He Saw It Help Sick Child of Elected Official He Knows

Taking positions that are now easier 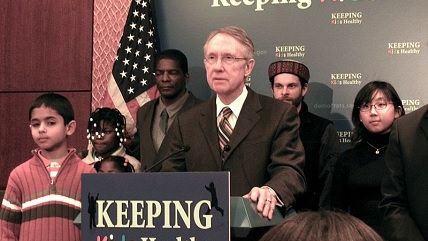 Harry Reid is having a change of heart on medical marijuana, telling the Las Vegas Sun it would've been easy for him to say no to medical marijuana a decade ago because it was a gateway drug, but that now he sees there are "some medical reasons for marijuana." His evolution was informed, he said, by stories he's heard of medical marijuana helping, on the news and in his life. Via the Sun:

There was one case in particular, about the only son of a Las Vegas elected official whom Reid did not specify by name, who had severe kidney failure, losing not just one, but two kidneys while a college student.

"He was so skinny and doing so poorly and somebody told him and his mom, you know, you should smoke some marijuana, because one of the side effects is … you get the munchies, you get extremely hungry," Reid said. "He tried it and sure enough, he was able to eat for the first time, he got hungry. So I thought, you know there might be some medical reasons for taking another look at this."

Reid wasn't ready to endorse Nevada legalizing marijuana like next-door Colorado did, saying he didn't know about that, but that he did know "we [the government] waste a lot of time and law enforcement going after these guys that are smoking marijuana," an increasingly popular and easy position to take in Washington, but one that's not yet translated to movement on the legalization of recreational marijuana.