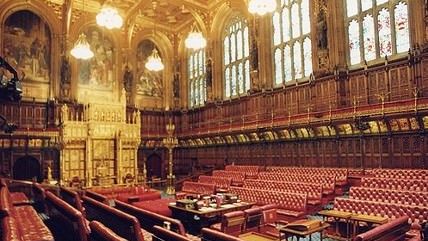 The British House of Lords, the U.K. Parliament's upper unelected chamber, has voted in favor of amending a clause in a bill that as written would allow anyone in England and Wales engaging in or threatening to engage in "conduct capable of causing nuisance or annoyance to any person" to face an injunction. According to the BBC, the Home Office "has said the new injunctions would never be imposed in an unreasonable way."

The campaign group Reform Clause 1, named after the worrying clause in the Anti-social Behaviour, Crime and Policing Bill, claims that if implemented Clause 1 of the bill "could have a chilling effect on free speech." The group rightly highlights the fact that numerous groups and people could be considered to be "causing nuisance or annoyance," such as carol singers, Scientologists, political protesters, and soccer players.

The injunctions outlined in the bill would replace Anti-Social Behavior Orders (ASBOs) which, despite their name, are not handed down to people who don't like socializing. Rather, they can be imposed on people who display "drunken or threatening behaviour," carry out vandalism, or "playing loud music at night." Unsurprisingly, ASBOs have been used on a wide range of people, as George Monbiot explained in The Guardian a few days before today's vote:

Asbos have been granted which forbid the carrying of condoms by a prostitute, homeless alcoholics from possessing alcohol in a public place, a soup kitchen from giving food to the poor, a young man from walking down any road other than his own, children from playing football in the street. They were used to ban peaceful protests against the Olympic clearances.

Monbiot went on to point out that the injunctions would come with potentially lifelong obligations attached:

The bill would permit injunctions against anyone of 10 or older who "has engaged or threatens to engage in conduct capable of causing nuisance or annoyance to any person". It would replace asbos with ipnas (injunctions to prevent nuisance and annoyance), which would not only forbid certain forms of behaviour, but also force the recipient to discharge positive obligations. In other words, they can impose a kind of community service order on people who have committed no crime, which could, the law proposes, remain in force for the rest of their lives.

The bill now goes back to the House of Commons.