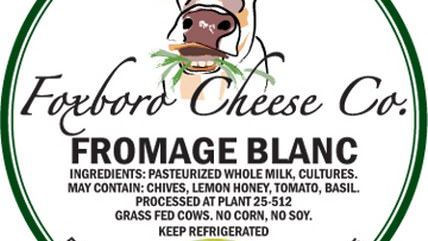 But while the 10-3 Patriots have New Englanders daring to dream of another NFL championship this year, the smaller but no less impressive Massachusetts institution that is Lawton's is struggling to fight an existential new threat proposed by the town's health department.

That crackdown would subject Lawton's to a host of new, stricter standards for raw milk above and beyond those Massachusetts presently requires of dairies throughout the state.

Lawton's and their customers—and supporters throughout the state and beyond—are up in arms. But Foxborough health department officials don't see the big deal.

"We're not trying to take away their rights," Foxborough health director Pauline Clifford told the Boston Globe last month. "We just want these regulations beefed up."

One of the regulations Clifford suggests are in need of beefing, she told the Globe, would "require the dairy to submit a list of its customers so they could be notified of any health issues."

While I find it exceedingly disturbing that a town would force its farmers to keep tabs on their customers (just as I would if a restaurant, or food truck, or any other food seller was forced to obtain each customer's name and address, and to hand those names and addresses over to city regulators without a warrant), I find it equally troubling that Pauline Clifford is one of the leading voices supporting this crackdown. (Indeed, according to journalist, author, and blogger David Gumpert, Clifford is "responsible for developing the new regulations[.]")

Though I'd never heard of Clifford before the current raw milk imbroglio, it turns out that she is no stranger to controversy.

When Foxborough promoted Clifford to health agent from her job as town sanitarian in 2008, the Attleboro-North Attleboro Sun Chronicle reported that Clifford was a controversial choice for the job because she "didn't meet all the job requirements," according to town manager Andrew Gala.

"[T]he promotion of Clifford, who lacked the advertised requirement of a bachelor's degree, has been a source of tension over the hiring process, qualifications and salary, according to town officials and records," reported the Sun Chronicle in the wake of Clifford's promotion.

Of course, an academic degree alone is no guarantee of anything. In fact, one particular example of this fact, another instance of the public health community's frequent attacks on raw milk, will always stand out in my mind.

Noted raw milk opponent Bill Keene, whose professional qualifications were never in doubt—he held both a doctorate in microbiology and a master's degree in public health—served as a senior epidemiologist with Oregon's state health department. His many accomplishments are rightly celebrated.

But Keene also claimed, in a May 1999 op-ed (subscription required) on raw milk in the prestigious medical journal JAMA, that "dairy milk is essentially a suspension of fecal and other microorganisms in a nutrient broth."

In other words, all milk is poo.

That patently false claim of Keene's has since clung to raw milk. It's been quoted everywhere from the website of food-safety litigator nonpareil Bill Marler (as part of the website's "peer-reviewed literature") to the pages of Safe Food, a 2010 book by Prof. Marion Nestle.

I pointed out the error of his statement to Keene, who sadly passed away earlier this month, in an email exchange with him in 2010.

Keene was cordial despite our disagreement. But while Keene admitted to me that he was "no dairy expert," I believe he should have retracted the statement, if not the entire JAMA op-ed.

Which brings us back to Pauline Clifford, who has been mired in controversy since her promotion.

In 2009, just a year after Clifford's promotion, the tiny Foxboro Reporter (for those of you keeping track, Foxborough is often spelled by lopping off the "ugh") devoted more than 1,600 words in a single column to describing discord and rancor within the Foxborough health department that had arisen since Clifford's hiring, including several bizarre allegations against Clifford made by two employees she supervised.

Passing that exam was described "[a]s a condition of her promotion[.]"

The dispute within the health department was so serious that the two dissident employees she oversaw, town sanitarian Marc MacFarland and environmental specialist Andrea McGillicuddy, eventually sued the city in 2010, "alleging that Health Agent Pauline Clifford's professional shortcomings have 'devastated' the office's functioning and placed the public health at risk," according to reports in the Foxboro Reporter.

The Reporter said the lawsuits painted Clifford as an "unqualified and abusive manager [who]…. defamed her two subordinates by spreading rumors of drug abuse, violated the privacy of their medical records and retaliated against and harassed them for reporting her actions."

In 2011, Foxborough board of selectman meeting minutes indicate the town was prepared to pay thousands of dollars to the health department employees supervised by Clifford to settle the lawsuit out of court.

Sure enough, the taxpayers' payout, according to a Sun Chronicle report, was at least $40,000.

What's more, it turns out that, like the late Dr. Keene, the person developing the rules in Foxborough is no dairy expert.

"When I asked Clifford whether she had any training in inspecting dairies, she said she didn't," writes Gumpert, who's covered the Foxborough issue extensively.

A hearing on the sale of raw milk in Foxborough is set for Monday, Dec. 16. It's almost too obvious to note at this point that the department should reject any notion of adopting its absurd and unjust proposed crackdown on raw milk. After that, Foxborough town officials should take a very long, hard look at their health department.