Faced up to life in prison after pleading guilty 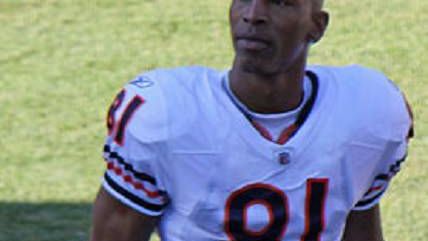 The Government pursued a drug kingpin charge against former Dallas Cowboys and Chicago Bears wide receiver Sam Hurd after he was allegedly caught in December 2011 purchasing a kilo of cocaine from undercover agents and agreeing to purchase up to ten kilos of coke and 1,000 pounds of marijuana week from them. He pled guilty in April and faced up to life in prison because of the amounts of narcotics allegedly involved, and was sentenced to 15 years today.

The charge was part of two years of federal investigations into Hurd, as explained in a great Sports Illustrated piece on the saga by Michael McKnight. Hurd had been getting marijuana sent to him from California while playing for the Cowboys and later the Bears, but the feds found no evidence he ever made a profit off the marijuana he shared with friends.

Hurd appears to have first showed up on the radar of federal authorities when an informant tipped off an ICE agent based in Dallas that someone (Hurd) was looking to buy a large amount of cocaine. ICE's purview is border security, but drug trafficking appeared close enough. Based on the tip, they were able to seize $88,000 from Hurd's Escalade, which was being driven by his mechanic, who was either the brains behind the attempted drug deal or a go-for for Hurd, depending which you ask. Hurd actually went to the ICE office, showing them a bank statement that listed his withdrawal of the money and explaining it was being used to buy a house for his mother (Hurd says now this was what the money was allegedly for). He was unable to get the money back the federal agents, and it appears his mechanics' attempt to earn the money back for Hurd was what led nearly two dozen law enforcement agents to participate in the sting that caught Hurd and the mechanic trying to purchase cocaine from undercover agents.

Read the whole Sports Illustrated piece, it's worth the read, and marvel at the waste of life, money, and time that the war on drugs leaves in its wake.

Hurd, notably, would not qualify under any program the Obama Administration might embark on to lower drug sentencing because the government still treats larger-scale drug crimes much as if they were capital offenses, and hasn't even made an attempt to show more leniency to people whose lives were ruined over far smaller consensual narcotics transactions.