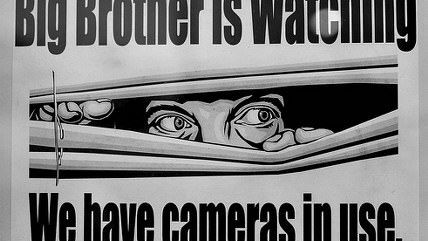 You look familiar—says the cop with the smartphone. And never mind that FBI specifications allow for a faulty match up to 20 percent of the time; local, state, and federal law enforcement officers based in California's San Diego and Imperial counties have quietly taken to the streets with federally funded tablets and smartphones to match the faces of people they meet with databased photographs. If the experiment proves successful, in government terms, you can probably expect the blend of cops, mobile devices, and facial recognition software to come to a sidewalk near you.

For the Center for Investigative Reporting, Ali Winston writes:

On a residential street in San Diego County, Calif., Chula Vista police had just arrested a young woman, still in her pajamas, for possession of narcotics. Before taking her away, Officer Rob Halverson paused in the front yard, held a Samsung Galaxy tablet up to the woman's face and snapped a photo.

Halverson fiddled with the tablet with his index finger a few times, and – without needing to ask the woman's name or check her identification – her mug shot from a previous arrest, address, criminal history and other personal information appeared on the screen.

Halverson had run the woman's photograph through the Tactical Identification System, a new mobile facial recognition technology now in the hands of San Diego-area law enforcement. In an instant, the system matches images taken in the field with databases of about 348,000 San Diego County arrestees. The system itself has nearly 1.4 million booking photos because many people have multiple mug shots on record.

The little-known program could become the largest expansion of facial recognition technology by U.S. law enforcement. Amid an international debate over collecting and sharing huge amounts of data on the public, this pilot program is putting that metadata to use in the field in real time.

Managed by the Automated Regional Justice Information System (ARJIS), a joint project of 75 government agencies, and funded by the National Institute of Justice, the Tactical Identification System combines traditional mugshots with controversial (and not entirely reliable) facial recognition software, and puts it in the hands of police officers in the field. The system deployed in California appears to draw only from booking photos at the moment, but many states have already linked facial recognition technology with their driver's license databases, multi-purposing everybody's least favorite photos into de facto police lineup images. Police lineup images with uncertain access control and, as mentioned, a high potential for false positives. It's probably safe to assume that, if the Tactical Identification System approach is replicated elsewhere, police mobile devices will be linked with that wider range of photo databases.

So, when do police officers in San Diego and Imperial counties whip out their smartphones to identify passers-by? During arrests, of course, but also during other encounters with the public.

One Immigration and Customs Enforcement agent who provided a testimonial said he used the device during a warrant sweep in Oceanside. While on the sweep, the agent wrote, his " 'spidy senses' were tingling" about the immigration status of a neighbor of the person he was pursuing.

He decided to run the man's picture through the facial recognition software. The agent discovered the man was in the country illegally and had a 2003 DUI conviction in San Diego.

"I whipped out the Droid (smartphone) and snapped a quick photo and submitted for search," the immigration agent wrote in his testimonial for the Automated Regional Justice Information System. "The subject looked inquisitively at me not knowing the truth was only 8 seconds away. I received a match of 99.96 percent. This revealed several prior arrests and convictions and provided me an FBI #. When I showed him his booking photo, his jaw dropped."

You never know when your photo will be snapped. So remember to comb your hair before going out in public.