Man who was shot initially charged with aggravated assault 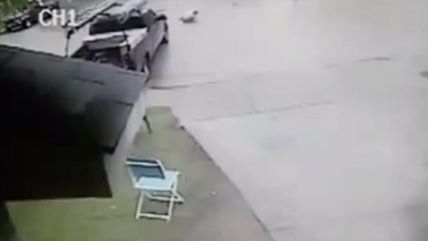 Bobby Bennett was shot by a cop in the middle of the day last week. Police claimed he was moving toward them aggressively with a knife when Officer Carden Spencer shot him, but surveillance video from a neighbor's house contradicted that story.

"What happened 10 days ago should have never have happened in the first place, and I want to make sure it never happens again," said [family attorney George] Milner, who said Bennett was shot in "cold blood."

"Officers are not above the law," Chief [David] Brown [of the Dallas police] said as he began his nearly hour-long statement to reporters. "We are not going to look the other way. We are not going to sweep officer misconduct under the rug."

Chief Brown also offered an apology to Bennett and his family, and explained why it took ten days to complete the investigation before the Spenser was fired and charged.

Last month, a cop in North Carolina who shot and killed an unarmed man that had crashed his car and was seeking assistance was charged with voluntary manslaughter the same day. Video also exists of that incident, via dashcam, but police in Charlotte have resisted calls to release it; the victim's fiancée says the police chief had promised to release the video.