Gay Marriage Recognition Efforts in Arizona Falter, But Not Because of Conservative Opposition

Established LGBT groups don't like it when they aren't in charge 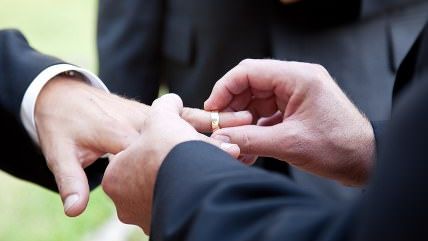 Back in June, some folks in Arizona started organizing efforts to overturn the state's ban on recognizing same-sex marriage. They were putting together a ballot initiative that would turn the state's marriage law sex-neutral (but would still limit recognition to couples).

Their organization, Equal Marriage Arizona, had until July 2014 to gather about 260,000 signatures to get it on the ballot for fall of next year. But they announced this week that they're abandoning their efforts, because they can't seem to get support for their efforts – from the left. The (Arizona) Republic reports:

"The various LGBT advocacy groups in the state and nationally announced they weren't going to throw their support behind the initiative," said Equal Marriage Arizona co-chair Erin Ogletree Simpson, a retired Tucson attorney who chairs the Log Cabin Republicans of Arizona. "Without their help, we aren't able to do it."

Ogletree Simpson said there were differing opinions about strategy on when would be the best time to pursue a same-sex marriage initiative. The advocacy groups thought it would be best to wait until 2016, which would give them two more years to sway voters and a presidential election year, which tends to draw more voters to the polls.

"They didn't feel like Arizona was ready for equal marriage in 2014," Ogletree Simpson said of the advocacy groups. "I'm just happy our effort has prompted a focus from the various group to look at 2016 and start putting together a strategy."

But a poll in May showed that a majority of Arizonans do support gay marriage recognition – 55 percent. And if current trends hold, that number is likely to rise by 2014. Equal Marriage Arizona has already gathered 9,000 signatures. Ogletree Simpson said people in the Arizona gay community were ready for a fight, but it appeared the activist leadership wasn't willing to support them:

"There has really been concern about strategy, support and fundraising," said Sheila Kloefkorn, who serves on the national board of the Human Rights Campaign. "We know what the sting of defeat feels like, and we can't afford another defeat. While support is high, it's not quite what we would need it (to) be for 2014."

"But we want to win," she said. "We need a little more time to get out there and educate the public about why marriage matters. This now clears the way for what I think will be a more collaborative effort, possibly in 2016, that includes members of the faith community, businesses and people across the political spectrum."

Emphasis added. This push was being organized by conservatives and libertarians (and both organizers have business connections). What other people across the political spectrum did they need, other than the Democrats/liberals? It seems like this problem is self-created by the advocacy groups' refusal to participate. On Equal Marriage Arizona's Facebook page, volunteer Elisha Dorfsmith took a dim view of the failure of established gay activist groups to come aboard:

My comments to Flagstaff Pride who went out of their way to fight equal marriage Arizona:

The ballot measure wording was something that nobody could argue with. It changed the current language that says marriage is between a man and woman to "two people". Libertarians and Log Cabin Republicans were all out collecting signatures and campaigning. I personally collected pages and pages of signatures.

If everyone had joined together it could have passed. Unfortunately, peer pressure and dare I say bullying by groups on the left caused every left leaning group that had previously endorsed the measure to pull their support.

The impression I am left with is that the only reason the left fought this so hard is because the ballot measure was not created by Democrats.

The fact remains, if we want something to pass we're all going to have to work together. Attacking people who support you (libertarians and log cabin republicans) hurts your cause. Very very sad that it turned out like this.