Cops shot at dog six times after he lunged at them, they say 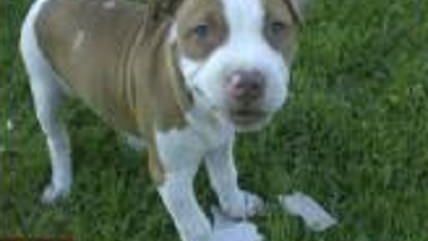 Baltimore police were searching for a suspect who was apparently hiding in the basement stairwell* of Ed Augustine's home when they shot Augustine's pitbull. They claimed the dog charged at them. Now Augustine and his step-daughter are suing the police department. The Huffington Post reports:

In papers filed in the Circuit Court of Maryland for Baltimore City at the end of August, Augustine said that he followed his dog onto the back porch and found that in "spite of the unusual stimuli around him, Kincaid's hair remained unruffled and his teeth concealed by his relaxed face." As one officer was arresting the suspect, the suit alleges, Augustine was in the process of securing Kincaid's harness and asking the second officer not to shoot.

Police officials said that Kincaid lunged at one of the officers. That officer fired six bullets, three of which hit the dog, two in his head and one in his body, according to media reports. The lawsuit alleges that officers laughed after Kincaid was shot and threatened to arrest Augustine if he touched his dog's body.

The lawsuit seeks $450,000, and the whole complaint is available via the HuffPost here (pdf).

*UPDATE: This is outside the house, according to a commenter that identifies herself as the step-daughter.