Doesn't give you superhuman strength or make you a cannibal 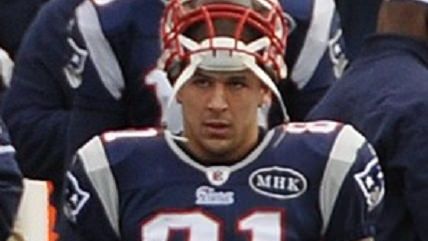 Rolling Stone is reporting that Aaron Hernandez, the former Patriots tight end charged with murder, was a regular user of PCP, or angel dust, setting the stage for a good old fashioned drug  panic. PCP has been blamed by authorities for violent behavior and even superhuman strength. Time magazine's Maia Szalavitz busts some of these myths in an exercise of relative objectivity about drugs rarely seen in mainstream media:

Myth. Research suggests that, like alcohol, it mainly increases aggressive behavior in those already prone to it. The drug can induce psychotic delusions and paranoid behavior. But most users remain unthreatening in the face of these disorienting experiences, even placid.

Myth. Police and emergency room personnel are familiar with the bizarre, unpredictable and violent behavior of some PCP users. Their failure to comply with orders and their resistance to being restrained creates the illusion that the drug makes them stronger; some officers have even claimed that the drug gives people the ability to break out of metal handcuffs.

But there's no evidence that PCP actually increases muscle power— the single study done on the subject in mice found a drop in grip strength among animals given the drug. And, scientists say, there are no plausible mechanisms to explain how PCP could affect strength.

Read the rest of the article here.

Taking exceptional, and unrepresentative, cases of drug use and drug-induced behavior and treating it as if it's the norm is standard fare for a media that's always ready to buy in to the myth of drug as destructive force. It's not true, but it makes for sensational stories. Check out Jacob Sullum on the 5 best drug scares of 2012 here, and Reason TV's discussion with neuroscientist Carl Hart, who says misconceptions about how drugs affect people have created destructive and ineffective drug policies, below: