Wasn't Senator Obama the Guy Who Believed in Checking With Congress Before Blowing Stuff Up? 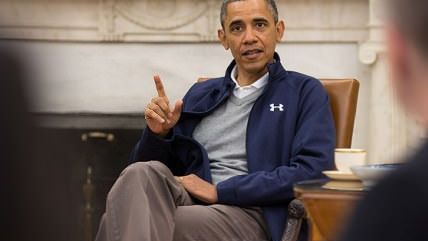 Once upon a time there was a United States Senator who was very critical of the then-incumbent president for unilaterally waging war without asking for authorization from Congress. That president's actions pretty clearly violated the Constitution's Article 1, Section 8, not to mention the War Powers Resolution. As this senator told the Boston Globe, "The President does not have power under the Constitution to unilaterally authorize a military attack in a situation that does not involve stopping an actual or imminent threat to the nation." That senator was named Barack Obama, and he is now president of the United States.

From Leigh Ann Caldwell at CNN:

As President Barack Obama considers military action in response to Bashar al-Assad's alleged use of chemical weapons in Syria, a debate over whether he must seek Congress' consent has surfaced. It's a debate with which the president is extremely familiar.

As a senator, Obama was a staunch critic of President George W. Bush for not obtaining renewed authorization for the war in Iraq. He blasted his predecessor in 2007, saying, "The president does not have power under the Constitution to unilaterally authorize a military attack in a situation that does not involve stopping an actual or imminent threat to the nation."

Additionally, as a candidate for president, Obama reaffirmed that sentiment. He told the Boston Globe in a questionnaire, "The president does not have power under the Constitution to unilaterally authorize a military attack in a situation that does not involve stopping an actual or imminent threat to the nation."

"It is always preferable to have the informed consent of Congress prior to any military action," Obama added at the time.

As a senator, Vice President Joe Biden had a similar take. During a campaign speech in Iowa in 2007, he said "the consequences of war—intended or otherwise—can be so profound and complicated that our founding fathers vested in Congress, not the president, the power to initiate war, except to repel an imminent attack on the United States or its citizens."

What a difference a few years — and a taste of the imperial purple — can make! As Caldwell points out, the Obama administration didn't look for congressional permission to wage war when sending military units to attack targets in Libya, or to expand operations in Afghanistan. Drones busily blow the crap out of targets intended and not so much in Pakistan and Yemen without a "by your leave" toward the Capitol.

Undoubtedly, the president and his supporters would argue that Congress threatens to be "obstructionist" — which is just another way of pointing out that lawmakers could say "no." This, it might be mentioned, is a power explicitly given the legislative body by the Constitution. Or, as a difference engine-programming, steampunk version of Thomas Jefferson might have put it, "that's a feature, not a bug."

So President Obama breaks with his senatorial self to continue down the monarchical path of his predecessor in the White House — a path he once harshly criticized. Before he gained the power to stroll down it, that is.

Oh, yeah. Senator Obama also opposed warrantless surveillance, though he fudged a bit on the answer by saying he would "only authorize surveillance for national security purposes consistent with FISA and other federal statutes." He also rejected the idea that a president could detain U.S. citizens without charges as enemy combatants. In fact, that senator had some pretty interesting views about the limits of executive authority.

Whatever happened to that guy?