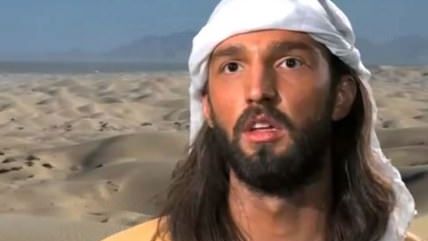 Nakoula Basseley Nakoula, a.k.a. Mark Basseley Youssef, the man behind the infamous, campily awful Innocence of Muslims movie trailer that caused a bit of a stir on YouTube last year, has been released from prison to a halfway house.

Nakoula's anti-Islam movie was originally fingered by the Obama Administration as the inciting factor that led to the deadly attack on the U.S. consulate in Benghazi, Libya, that killed four. At the very least the claim was a huge mistake. Whether it was a deliberate lie to conceal other problems is still under investigation by congressional Republicans.

By filming and posting the movie online, Nakoula violated probation for a previous bank fraud conviction and was tossed into jail in October, prompting critics of the administration to declare him a political prisoner. Now that he's almost free, Jake Tapper at CNN snagged an interview, where the man said he doesn't bear a grudge against President Barack Obama but thinks the administration has behaved irresponsibly:

Asked how he felt when the administration tied his film to the attack by armed militants that killed Ambassador Christopher Stevens and three other Americans, Nakoula said he was shocked.

"Because, you know, I never thought, my movie can cause anyone trouble or anyone can get killed from my movie," he said.

Asked if he thought the administration put him in danger, Nakoula declined to comment. But he said the government is "hiding" him.

He said he personally likes President Barack Obama but says his administration was irresponsible over the Benghazi matter, highlighted in television appearances by then U.N. Ambassador Susan Rice. She said it appeared that the Benghazi attack was linked to protests over the movie, which were later proved untrue.

"I don't blame him. He has a lot of responsibility," Nakoula said of Obama, but adding a message for his administration.

"Guys, before you do anything, please give yourself time to think about it, because you are responsible people. You are in a place — you have to be responsible in it," he said.

He also insisted the movie was not anti-Islam, which is complete bullshit, but also completely irrelevant to his right to have made the movie. Now, whether he had the right to deceive the actors into participating in it without telling them what he was really doing and then dubbing over their lines, is another question. Nakoula's dodgy response to Tapper's questions is to say he made the actors famous and that he tried to tell them but they only cared about the money and getting in front of the camera. An actor in the film is suing, so it will be a matter for the courts.

Watch Tapper's phone interview with Nakoula here. In May, Matt Welch documented all the people who irresponsibly blamed Nakoula's movie for the Benghazi attack.