Looking for one more pay day 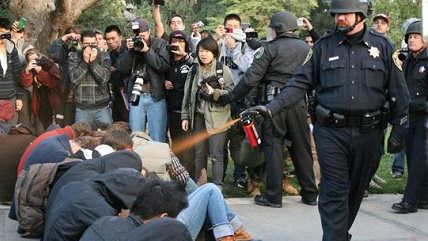 The image of a UC Davis police officer pepper spraying peaceful student protesters in 2011 quickly went viral, and now the cop who was fired over the incident wants a pay day because his identity became public.

The former police officer who pepper-sprayed students during an Occupy protest at the University of California, Davis is appealing for worker's compensation, claiming he suffered psychiatric injury from the 2011 confrontation.

John Pike has a settlement conference set for Aug. 13 in Sacramento, according to the state Department of Industrial Relations' website.

Pike was fired in July 2012, eight months after a task force investigation found that his action was unwarranted.

Meanwhile, a court has ordered UC-Davis to release the identity of the other police officers involved.

From the Daily Californian:

A state appellate court ruled Tuesday that the University of California must disclose the names of all police officers who were involved in the Nov. 18, 2011, UC Davis pepper-spray incident.

The 1st District Court of Appeal, ruling in favor of the Los Angeles Times and The Sacramento Bee, contended that the Federated University Police Officers Association, citing confidentiality concerns, had failed to demonstrate that police officer identities were excludable from disclosure under the California Public Records Act.