Joe Biden May Not Often Be Right, But When He Was It Was Pretty Astute; Noun-Verb-9/11 Still a Politician Favorite 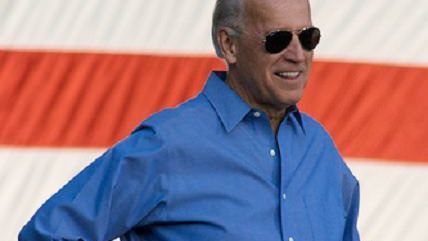 Did you hear the one about the guy in Washington who was arrested after doing exactly what Joe Biden recommended people do to scare off intruders (firing a shotgun into the air)? That happened; JD Tuccille noted when Biden first dispensed the advice that it very well could. The vice president's sort of a big joke, but not in the endearing way The Onion's version of him is. Nevertheless, Joe Biden was right once.

During a presidential debate in the run up to the 2008 Democratic primary season, Biden decided to look ahead and take a shot at Rudy Giuliani, who had about as much chance of winning the GOP primary as Biden had on the Democrat side. Par for the course for primary candidates to start with the attacks on their possible general election rivals. Biden said Giuliani's entire campaign was "a noun, a verb, and 9/11":

Four years later, Joe Biden would adopt Giuliani's campaign style, repeatedly touting "Osama bin Laden dead, Detroit alive". It shouldn't be surprising, because using 9/11 and terrorists and the threat/fear of terrorism in lieu of rational arguments is just too easy for our rarely-thinking politicians not to do.

We saw it on display Tuesday with the vigorous defense of the NSA program by Republicans like Mike Rogers and Michele Bachmann (Democrats didn't really defend the program on the House Floor, but it's their president, right or, mostly, wrong, so 83 of them defended him when it came down to a vote). And we saw it again this week in the context of the 2016 election, as Jesse Walker highlighted last night, with Chris Christie calling the "strain" of libertarianism in the GOP (and the Democratic party?) dangerous, because he hasn't forgotten 9/11.  There was no attempt at rational argument in his comments, just an appeal to emotion. Christie suggested Paul and others urging caution about the national security state go "sit across from the [9/11] widows and the orphans," as if there were no families of the victims of 9/11 that believed differently from Chris Christie. So here we are America, in the early stages of the 2016 presidential election, with politicians using the same tired 9/11 fearmongering that started helping them get elected as early as Michael Bloomberg's 2001 mayoral victory.