The First Amendment cares not for your arbitrary guidelines 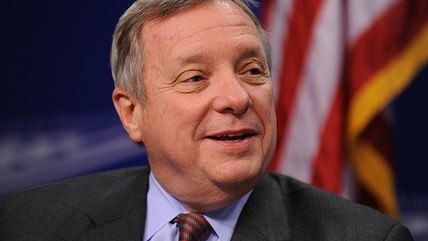 Glenn Harlan "Instapundit" Reynolds (seen earlier today writing about the sanctity of one's home and the Third Amendment) elegantly schooled Democratic Illinois Sen. Dick Durbin today in the New York Post. Durbin recently turned to the pages of the Chicago Sun-Times to write that the federal government needs to define what a real "journalist" is to determine who is accorded media protections like shield laws and, you know, consitutional rights. By which, he means, probably not those feckless bloggers who may not have bosses to call and yell at if you don't like what they've written. He suggested as much back in May.

Personally, I think a journalist is someone who's doing journalism, whether they get paid for it or not.

And Durbin is a constitutional ignoramus if he thinks that when the Framers talked about freedom of the press, they were talking about freedom for the press as an institution.

Journalism is indeed an activity, not a profession, and though we often refer to institutionalized media as "the press," we should remember that James Madison talked about freedom of the press as "freedom in the use of the press" — that is, the freedom to publish, not simply freedom for media organizations.

In Madison's day, of course, the distinction wasn't as significant as it became later, when newspaper publishing became an industrial activity. It was easy to be a pamphleteer in Madison's time, and there was real influence in being such.

It's such a tiresome argument to keep having (Matt Welch wrote about shielding journalism, rather than journalists, back in 2005). Tweeting about a car crash you saw on the interstate is an act of journalism. It doesn't matter that only a few of your friends might see it or care. You are passing along information. That's all journalism is. The right of free speech doesn't apply only to important speech or for people who are paid to speak. Freedom of religious expression doesn't apply only to the minister or rabbi. It applies to everybody. Any rule that applies to journalists should by its nature apply to anybody who is providing information to others.

In my experience, though, Durbin's misguided idea of journalism as an industry rather than an action isn't confined to politicians. Sometimes it's even perpetuated within the field. More than once in my time at a newspaper I've heard people say something to the effect of, "The media is the only industry that has protections written into the Bill of Rights." That's like saying that speechwriters get special recognition from the First Amendment.